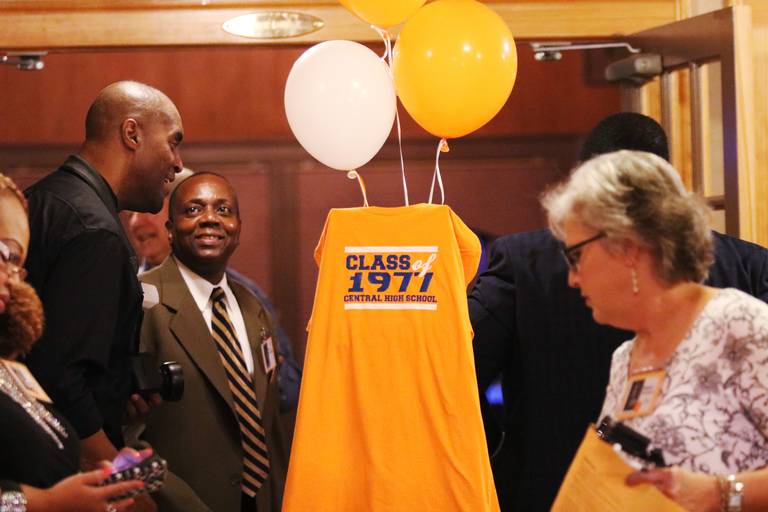 Avis Felts and Fred Frost hadn’t seen each other since they graduated Central High School in Macon in 1977.

But when they reunited at Healy Point Country Club at their recent 40-year class reunion, they picked up where they had started in the fourth grade at Alexander IV Elementary: as fast friends.

Frost had been at Alex IV for a few years before Felts came to the school, and “he was like he is now, always willing to help, friendly, always (asking) ‘Do you need anything, do you need anything?’” Felts recalled.

“I was flirting, was what I was doing!” Frost interjected.

As members of Central’s class of 1977, Felts and Frost were among the first Macon children to spend all or most of their school years in racially integrated schools. Felts is black, and Frost is white.

“When I heard about the class reunion, I thought about Freddy,” Felts said. “He didn’t see anybody for their color or anything.”

Frost said that now, four decades later, “It breaks my heart when it seems like today there’s so little of that color-blindness.”

Felts, Frost and their classmates are in a unique position to comment on the de facto resegregation of schools that has occurred in the decades since the official segregation at their schools ended as a result of court orders.

As previously reported by Mercer University’s Center for Collaborative Journalism and its partners, The Telegraph and Georgia Public Broadcasting, the number of white students attending Bibb County public schools has dropped almost in half over the past two decades, while the number of black students has held steady.

Local private schools remain predominantly white, and of those white students who remain in public schools, a quarter are concentrated in one charter school, The Academy for Classical Education.

At the 40-year reunion, several black Central High alums recalled how certain white classmates were particularly welcoming as they entered schools from which they had previously been barred.

“You gave me that album in the eighth grade, and we have been friends since,” Patterson said to Hall.

While it might seem unusual today that a white student helped introduce a black classmate to a black artist, and not the other way around, both men said it was natural in their milieu.

“We didn’t know the difference back then,” Hall said. “We were listening to Marvin Gaye. We listened to KC and The Sunshine Band. It really didn’t matter.”

“It didn’t matter. That was our school,” Patterson added. “When we went to Central, we were a together people. We didn’t want a ruckus.”

“It all blended together so well back then,” Hall said.

Not all African-Americans from the class of ‘77 who attended the reunion remembered their own integration as going so smoothly.

When Kenneth Williams and his brothers integrated into Pearl Stephens Elementary, they were in the significant minority, and they “were called certain names,” he recalled. “I don’t want to repeat it right now, but it wasn’t good.”

Integration at the elementary level was voluntary at the time. Williams said their father believed his sons would grow up to be more well-rounded people if they went to school with people from different backgrounds, even if those differences resulted in conflict.

“We would, at first, run home to keep from having to fight” with white students after class, Williams said. “My dad told us that ‘You’re gonna go to that school, so you might as well stand up and fight because you’re going back!’ ”

Some white members of the class of ‘77 remembered discrimination as well.

Elaine Edwards VanCleave, who helped organize the reunion, remembered being in the sixth grade at Joseph Riley Elementary School when the first black students joined her class.

Prior to that year, VanCleave recalled, whenever recess was canceled due to rain, the teachers would have the students square dance inside. To her disappointment, she said, that activity ended when schools were integrated.

“The talk that I remember (hearing) was that black kids and white kids shouldn’t be dancing together,” VanCleave said.

Years later, VanCleave raised her own children in Birmingham, Alabama. Without meaning to, she said, her family contributed to the resegregation of schooling that is taking place across the South.

“When we were looking for a neighborhood to move to, you know, we were just looking for a good school system,” she said. “I was naive at the time — I didn’t realize that I was moving my kids into a completely white school system.”

When she realized what she’d done, VanCleave said, she was disappointed that her children wouldn’t have the same diverse experience she had at Central, which helped her to develop a richer understanding of the world.

Despite the difficulties, many Central ‘77 grads at the reunion said attending integrated schools helped them live better lives as adults.

“Separate was not equal,” said Tracey Curtis, recalling his early years of school at the all-black Green Street Elementary, which he said had poorer facilities and learning materials than what white students had.

“Going to school with the white kids was probably one of the better things that happened,” he said.

Curtis went on to become an assistant principal and athletics director at Newton High School in Covington.

Roger Jackson, who is black, played football at Central and helped the Chargers win the 1975 state championship. (He remembers when they took the bus back to Macon from the championship game in Atlanta, a group of white boys passed by in a car and flashed their middle fingers at the team. White coaches following in their trucks chased down the car, pulled in front of it and “mooned” the boys, Jackson said with chuckle.) He went on to play professionally with the Denver Broncos and then had a career as an NFL scout.

Going to integrated schools “helped me quite a bit,” Jackson said. “Being in sports, it was black and white players together, and we always thought of each other as brothers because we had to depend on each other.”

As to why schools have been resegregating in recent years, Jackson said, “Some blacks say (forced) integration might have been the worst thing” because it may have exacerbated racial tensions long term.

Gregory Lofton, who is black, said he’s had second thoughts about whether integration was beneficial for African-Americans in the long run.

Lofton, who researched the topic as a returning student of secondary education at Valdosta State University, said that while black-only schools were under-resourced, the teachers there had higher expectations for black students.

“There was something about the way we were driven in that environment,” Lofton said. “They would push you even if you seemed to be a perfect student. And I didn’t get any kind of challenge from third grade on” when he integrated into Joseph Clisby Elementary.

As to why white families have fled Bibb schools in such numbers, Joe Sledge said the school system declined in the ‘80s and early ‘90s. Sledge, who is white, said there was stricter discipline when the class of ‘77 went to school.

“I do believe that the corporal punishment — paddlings, so to speak — was a better system to maintain discipline in the classroom,” he said.

Sledge, whose daughter is a Bibb public school teacher, added that he believes order has been improving in the schools in recent years and singled out The Academy for Classical Education as an example.

Several people attending the reunion, black and white, attributed discipline problems in schools to a difference in parental attitudes compared to what they grew up with.

“Mom would say, ‘When you get over there (to school), you do what you’re told,” Patterson recalled. “‘You go in there and sit your butt down, because if they send you home to me, I’m gonna get you again!’”

“Parents, during our era, listened to us,” added Patterson’s friend Rufus Bundridge, who is black, “but they didn’t just believe us and go straight to the school and want to jump on the school teacher or the principal.”

Williams sounded a note of skepticism at the notion that white families have fled Bibb in response to discipline and other school quality issues.

“Sometimes I think it is based on race,” Williams said. “People see themselves differently, or better, and therefore they don’t want their kids around people who they feel that they’re better than.”

However, he added that he believes over his lifetime there has been a real breakdown in standards of conduct, both in schools and in society generally.

Asked who is to blame, Williams replied, “I think we are to blame.”

“My generation,” Williams said, “we sort of like depend on what happened in the ‘60s in the ‘70s to carry us through, instead of standing up and saying, ‘Oh this is not right, we need to do something.’”

Members of Central’s class of 1977 were among the first Macon children to spend all or most of their school years in racially integrated schools.

At the 40-year reunion, several Central High alums recalled those days of integration.

Tracey Curtis recalled his early years of segregated schooling at Bibb County’s all-black Green Street Elementary and concluded “separate was not equal.” Looking at today,Curtis questions whether white families who have fled to private schools.

Jeff Cheeves, a member of Central High School’s class of 1977, was among the first Macon children to spend all or most of their school years in integrated schools. He said he had no personal issues with the racial integration of Bibb County school.

Kenneth Williams recalls how his father voluntarily integrated his sons into Bibb County’s Pearl Stephens Elementary School. Williams said he and his brothers used to run home from school to avoid being drawn into fights with white children.

Gregory Lofton, a member of Central High School’s class of 1977, was among the first Macon children to spend all or most of their school years in integrated schools.