The Art of Filmmaking in Macon 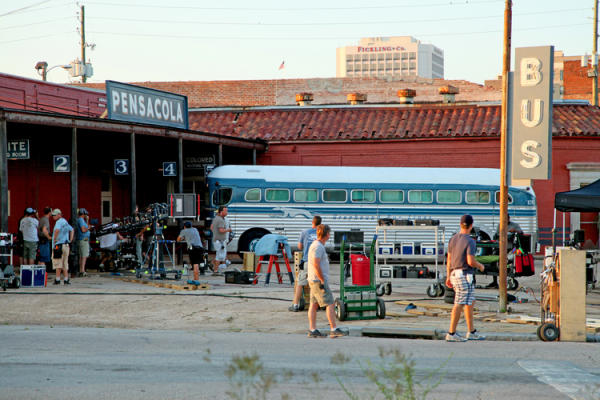 Set of a movie filmed in Macon

Fast Five. Black Widow. 42. Hillbilly Elegy. This is just a small list of many movies filmed in Macon throughout the decades. The city has become a major hotspot for production companies to bring their movies and television shows. Filming in Macon and Central Georiga is on the rise.

According to IMDB.com, over 100 titles have been recognized as being filmed in Macon.

“I will make sure that the film company is prepared for what questions are going to be asked. Information is sent to the county first. So everybody generally has a pretty good sense of direction, to begin with,” Buzza said. “Then, it’s just a matter of asking a few questions and making sure that everybody understands the schedule.”

Buzza said the process of initially visiting the film site, to the permit process, and finally, filming takes months.

“In some cases, we’ve had a very fast turnaround. The county likes to have about three to four weeks in advance to have that permit in hand before filming takes place,” Buzza said.

The cost of doing business is cheaper in Macon than in Atlanta. But besides the city’s proximity to Atlanta, Buzza says there is another reason why film producers are drawn to Macon.

“We have architecture that fits within the context of the script. We’ve been able to post Oklahoma and several New York city bureaus,” Buzza said. “We can translate into Chicago and so many other places. We have a history that you don’t have to, as a filmmaker, go overboard to show. There are context clues within the architecture and histories of the buildings.”

Buzza says there is a lot that he hopes for in the future for film production in Macon.

“I’d love to see an entire television series or season film here. There’s more long-term opportunities to showcase the community with it. Look at the success of “Vampire Diaries” in Covington, Georgia, and “Walking Dead,” Buzza said. “When the series wraps, there’s still an opportunity to bring people to town from a tourism standpoint because people want to experience what they saw in their favorite show. We’ve had television episodes filmed in Macon, but not a whole season.”

Buzza’s personal favorite film production to work with was, “Zombieland.” It was the first that he had worked with from start to finish.

“I helped them identify one particular location, just because I happened to be driving by and I tracked down the owner. That was a really interesting process just because I was so new to it. And it was a very steep learning curve,” Buzza recalls.

Buzza says that his role is to make sure that everything goes smoothly once the current production is in Macon, and simultaneously still work with the company that is going to be here next.

“People have been really impressed when they’ve been here because Macon kind of rolls out the red carpet. We embrace the opportunity to have films here,” Buzza said. “That’s been really good for our reputation because people know that. Accountability is a huge thing in the film industry. They know that they’re going to get a fair and great experience here.”

Buzza says those efforts are citywide, not just a one or nine-person job.

“That includes the businesses and the bars where the crew goes after they have worked a long day, where the bartenders are excited to talk to them and have them there. Everyone is welcoming and every experience that I’ve heard has been very positive,” Buzza said.

Bradford Haynes, a local actor, producer, and writer who has been involved with numerous projects, says Macon has been a very pleasant, welcoming, and enjoyable place for him and his family to call home. His wife, Kyrsten, and two daughters, Addison and Lauren Grace have lived in Macon for seven years. They lived all over the world when Haynes played professional baseball.

“Macon has always been a hotspot for filming dating back to “Fried Green Tomatoes” and other major projects. However because Atlanta has become such a haven and oversaturated with filming, there’s not enough available locations,” Haynes said. “Not to mention Macon just has this beautiful aura about itself. The community and the city of Macon are just so welcoming to the idea of allowing filmmakers like myself to come here and film while being embraced.”

Haynes has been a part of major films such as “Flight” and “The Watch,” as well as popular television series, “Stranger Things” and “Teen Wolf.”

Haynes’s favorite project to work on recently is called, “Best Summer Ever,” it will be streaming on many digital platforms on April 27.

“The reason why it is so special is because it was a very integrated group of individuals from all walks of life including the disabled and it showed that no matter who you are or what kind of physical mishaps you’ve been given in life, one can still be great and do remarkable things in our business. I can’t wait for people to see the musical film,” said Haynes.

Haynes also owns his own production company, B12Haynes Productions. It was created around eight years ago and has produced things such as short films, independent films, commercials, and a television series.

“I’m just a regular guy who likes to be plugged into our church, which is Northway. If you wake up early in the morning or if you’re up late at night, you may see me jogging or rollerblading through town or in my neighborhood,” Haynes said. “When you have two little ones at home and a schedule full of auditioning, filming, and writing, you work out when you can. That could be at 1 a.m. or 5 a.m..”

Elliot Dunwoody, the owner of Bright Blue Sky Productions and former member of Macon Film Commission, says the traffic for filming in Macon has slowed down some.

“Because of COVID-19, film production pretty much came to a complete halt but over the last couple of months, things are opening back up and Macon is being scouted just about every week with a few shows that have already filmed here,” Dunwoody said.

A local film, “UnDEFILED,” is being made and Haynes plays the lead role as character Mitch Jennings.

“UnDEFILED” is a faith-based film that involves a riddled middle-aged baseball player named Mitch Jennings whose path crosses with a young female that is involved in sex trafficking. He is searching for his own identity and questioning God about his own existence. Meanwhile, the choice to help this young woman or not is weighing on him as well because it will ultimately determine her fate.

When the film, “UnDEFILED,” is completed, there will be a premiere in Macon. When the time comes, Haynes and the film’s production company will let the Macon community know the arrangements and would love to have everyone come out and see it before it goes to theaters.

“I’m definitely looking forward to bringing more projects to Macon and getting the community involved even more,” Haynes said.