New life for Macon blighted properties, but what about Whataburger? 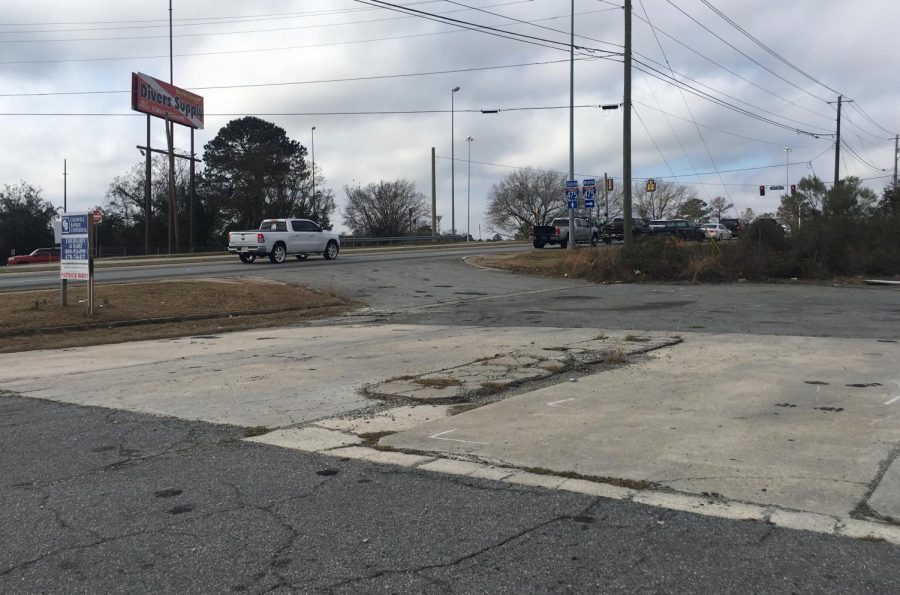 A new QuikTrip convenience store will be built on this vacant lot on Mercer University Drive near the Interstate 475 entrance ramp.

New businesses are moving into blighted properties that have been vacant for years after the Macon-Bibb County Planning and Zoning Commission approved new projects during its Monday meeting.

A new convenience store will be built at the long-abandoned corner of Riverside Drive and Spring Street that recently has been a haven for vagrants on the busy corner.

“I’m very anxious to hear about it because I want something done there,” Commission Chairwoman Jeane Easom told the project representative.

The commission approved a 3,675 square-foot-convenience store built of stucco with brick or stone accents.

“I’m like you. I’m happy something is being done,” newly appointed P&Z commissioner Gary Bechtel said.

“It’s time for something to happen on that corner,” Scott said after the vote.

“How soon can you start work on that?” asked Easom, who said she looks at that long-vacant corner every day.

Vacant land at the northeast corner of the Interstate 475 North entrance ramp at Mercer University Drive will be getting a makeover as commissioners approved a conditional use permit for a new QuikTrip, a fast food restaurant and possible storage buildings backing up to Tucker Valley Road.

Halpern Enterprises had submitted an application using a mockup design of a Whataburger restaurant, which would have been the franchise’s second location in the state.

“We have no agreement with Whataburger… just a representative type of user,” Steve West told commissioners after published news reports mentioned the popular chain that launched in Corpus Christi, Texas, in 1950.

West said the QuikTrip is a confirmed user for the property, but tenants are still being sought for the restaurant site and potential storage facility.

Commissioners also approved a new laundromat for 1990 Vineville Ave. at the corner or Holt Ave.

Appliant Ashok Patel, who recently completed his term as a P&Z commissioner, was originally deferred by the Design Review Board after neighbors objected to metal walls and the landscaping plan.

Patel revised the design and has agreed to plant trees along the back of the building which will be remodeled with an exterior that includes brick trim and stucco.

“Another one of those buildings that’s been sitting there forever,” Easom said.

“It’s going to be a nice building in what is an eyesore right now,” Patel said.

Farther up the road, attorney Lars Anderson was given permission to tear down his building at 2462 Vineville Ave. and increase parking for his corner law office and the former Piggly Wiggly next door, that he plans to renovate.

Shannon Fickling, representing the Vineville Neighborhood Association and nearby neighbors, said they did not object to tearing down the building, but raised concerns about storm water drainage and streetscape landscaping.

Fickling said that stretch of Vineville is considered a “place in peril” by the Georgia Trust for Historic Preservation due to a number of vacant homes that are falling into disrepair. Neighbors would like to see enhanced designs.

Anderson must come back to commissioners to get the parking lot plans and landscaping approved before proceeding.

“It pains me to take down a building, but I would like to redo the middle structure but by law I don’t have the parking necessary,” Anderson told the board.

Monday’s meeting also proved to be the final hurdle for Macon’s Kate Lambert, who will be building Barks n’ Brews, an off-leash dog park with an Airstream Travel Trailer bar at Rotary Park and in the adjacent property in the 600 block of Riverside Drive near First Street.

“These are popping up all over the country and the use of Airstream bars are as well,” said Lambert, an avid dog lover.

She has leased the property for five years from the Urban Development Authority and will be constructing a couple of covered pergolas with seating for socializing.

“I think this is a good idea,” Design Review Board member Carrie Robinson said during last week’s hearing. “I think it’s exciting and a good way to activate that space.”

Initially, the park will open with limited hours in the morning and evening and eventually expand to longer hours for park members and patrons.

“People love their dogs and they love beer and love being outside,” Lambert told the Design Review Board last week. “Just with my family and friends, I think, we could make it work, all the dog lovers.”

Commissioners granted her certificate of appropriateness for the project.

The project, that is in partnership with Moonhanger Group and NewTown Macon, will also feature a small bar with a rooftop lounge and was approved last year by the Design Review Board.

New home designs were approved for 53 lots on Shalako Lane and near Dream Catcher Drive and Cheyenne Way in an unfinished subdivision close to Arrowhead Park at Lake Tobesofkee.

Only three houses were built and the other parcels have sat empty for about 15 years.

The same company recently received approval for new homes on old lots in the Highlands neighborhood.

Commissioner Josh Rogers had the same reservations as he did with the Highlands project as the new homes will be using vinyl siding instead of the more expensive brick of the existing homes.

“It’s almost the same challenge – units built with higher quality materials but the values have not improved,” Rogers said. “It’s a pretty terrible situation to be in but I don’t have any better answers.”

Niederpruen said there is a market for these homes and expected them to sell quickly, including some one-story ranches.

“This is so different, this one-story to the other houses out there. If I were a homeowner I’d be sorely distressed,” Easom said before the vote.

Conditional use for a new used car lot of up to seven vehicles with an automobile detailing shop at 3073 Columbus Road was granted to Tevis Poole of Drive Style LLC.
Commissioners approved a minor property line change for Bob Cleghorn at 669 Arlington Place.
A certificate of appropriateness was approved for a new house at 1391 Chestnut St. with plans approved by the Design Review Board.
First Presbyterian Day School was approved for new campus landscaping, lightposts and banners along the driveways at 5671 Calvin Drive.
Ashok Patel was granted conditional use for a convenience store with fuel sales in an existing office building that was built in 2006 at 4977 Mount Pleasant Church Road. Patel must redesign the fuel tank location by request of the Macon-Bibb County Fire Department.
Commissioners approved rezoning three lots from heavy industrial to agricultural for a single-family dwelling in the 5200 block of Arkwright Road near the old power plant location.
Conditional use was approved for a convenience store at 5594 Houston Road.
Live entertainment will be permitted at Rodeo Dom Bar & Grill at 4027 Pio Nono Ave.
A variance was granted to allow an outbuilding at 110 Witnman way.
Commissioners allowed a setback variance for Georgia Outdoor Advertising to erect a 70-foot-tall V-shaped static billboard at 230 Baconsfield Drive.
Conditional use was granted to allow a manufactured home 885 Lower Poplar St.