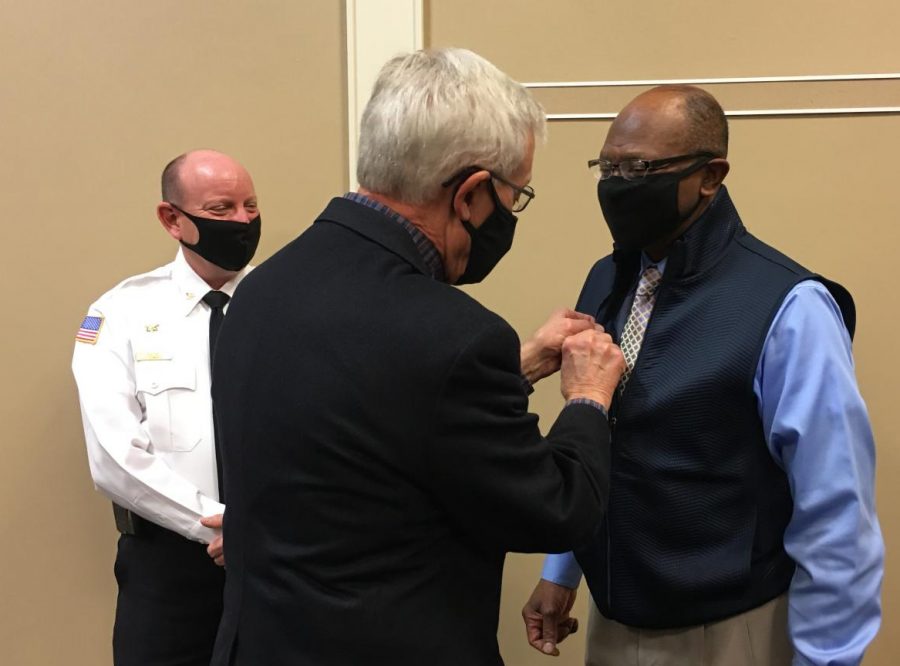 Marvin Riggins has spoken to the Macon Kiwanis Club for years but Tuesday marked the first time he did so in civilian clothes.

The former Macon-Bibb County fire chief spent the fifth day of his retirement serving as guest speaker for the club that designated Riggins as their first honorary member.

Interim Fire Chief Shane Edwards, who is a member of the club, introduced his former boss just hours after informing the department’s administrative staff that Mayor Lester Miller has tapped Edwards to run the department as acting chief.

“I tried my hardest to learn his style,” Edwards told the club, and even joked that he bought new clothes for dress down Friday.

Mimicking the boss backfired when they both showed up wearing the same sweater one morning, leading Edwards to go home and change to avoid expected teasing through the day.

He noted Riggins’ quiet demeanor that gave way to boldness when needed, and the former chief’s meticulous planning.

“We always knew where the organization was going and where the fire department needed to go,” Edwards said. “He always had a strategic plan in place.”

That wasn’t the case in 1979 when Riggins was a fresh graduate of Twiggs County High School.

The young man had no idea what he wanted to do other than to go to college in the fall. He never imagined becoming Macon’s first Black fire chief.

That summer, he applied for a job with the Macon-Bibb County Fire Department where his older brother worked. He was hired and never looked back.

Riggins reminisced about his first assignment at Station 8 on Mercer University Drive.

“Riding on the back of the fire truck… that was an exciting moment,” he said. “I was just really loving that because we were making a difference and we were helping people.”

He relished the respect he received as a firefighter and continued to rise in the ranks as he trained as an EMT and paramedic. He later picked up college degrees, including a master’s in governmental public administration from Georgia College.

Riggins gained valuable experience during those safety audits to develop a future strategy for building new fire stations to bring the entire county up to those highest standards after consolidation.

“We’re now a Class 1 in all of Bibb County, which is odd when you look at the scheme of things. Most are cities,” he said. “To find a county as a whole as a Class 1… that is rare.”

Just as Edwards has tried to follow Riggins’ lead, the retiree credits the late Chief Jim Hinson with developing his career and taking him “places I’d never have gone.”

“He was a unique person to me,” Riggins told the club. “He was a step-ahead guy. I saw him as setting the course… by the time we’d get to that point, he’d have our next set of instructions.”

Hinson was a forward thinker and a good-hearted individual, Riggins said.

“I always remembered (Hartley’s) steady hand at the wheel… no matter what happens. And I tried to pass that on to Chief Edwards,” Riggins said.

As second in command, Edwards figured it was his duty to roll on the overnight fires and brief Riggins in the morning. It never happened.

“I’d always look up and Chief Riggins would be pulling up. ‘Dang, he’s not even going to let me have this fire!’” Edwards said.

That type of hands-on dedication from a chief is rare, Edwards said.

“That just doesn’t happen in other fire departments across the nation,” he said.

During a retirement ceremony at headquarters last month, former mayor Robert Reichert pointed out that Riggins was one of the first department heads he named when he took office in 2008.

Reichert noted that Riggins could have retired post consolidation when tremendous incentives were offered but turned down a more lucrative pension to stay at the helm and see the younger officers come into their own.

His legacy as an International Fire Chief of the Year will be tough to top but he was ready to turn over the reins to Edwards.

“No question he’s ready for the job,” Riggins said.

The retired chief is getting used to living without the continual din and tones of the fire radio 24/7 and will be digging deeper into his closet for his daily wardrobe.

He might look different, but he will continue doing something he learned to love while on the department – teaching at local hospitals and Central Georgia Technical College, one of his alma maters.

“I’ll continue that to see if I can share and pass on some knowledge,” Riggins said. “That’s what it’s all about, making a difference, making it better for someone else. I’ve been truly honored to be able to serve.”