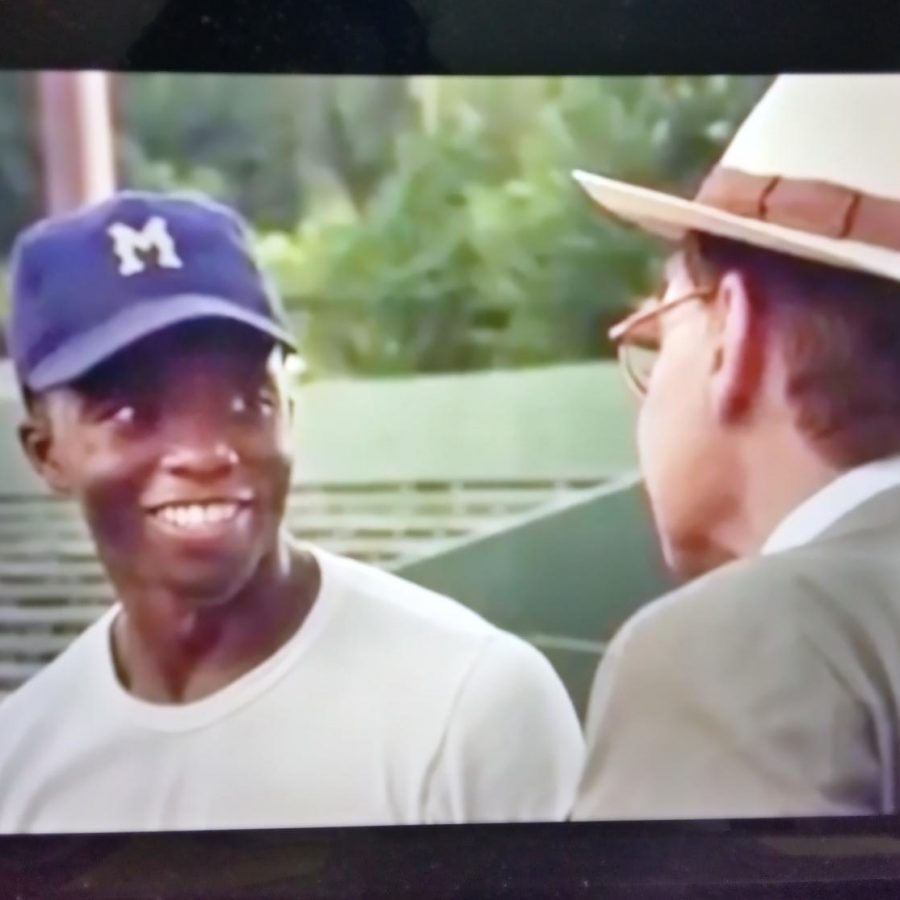 Chadwick Boseman in a scene from the movie 42 where parts of it was filmed at Luther Williams Field in Macon.

Chadwick Boseman would have celebrated his 44th birthday on Nov. 29. On Aug. 28, Boseman died from Stage 4 colon cancer.  At 43-years-old, Chadwick Boseman had been recognized as an icon by many people. As an actor, he established a legacy that has made African Americans proud, and touched baseball history in Macon.

Among Boseman’s powerful and breakthrough performances include one of his most popular roles as T’Challa in Black Panther and his historic portrayal of Jackie Robinson in the movie 42.

Chadwick Boseman died on the same day Major League Baseball celebrated Jackie Robinson Day. While Boseman has played several major figures in history, many Boseman fans in Macon remember when parts of the city were turned into a movie set for the filming of 42. The 2012 movie depicts how Robinson broke the color barrier of Major League Baseball in 1947. Macon’s historic Luther Williams Field was among the city locations transformed. Boseman won praise from his fans for how he captured the courage and talent of the legendary Jackie Robinson.

In 2018 Chadwick Boseman returned to his alma mater, Howard University.  As the graduation speaker, he shared a story about how he was fired from a soap opera for questioning the storyline of a character. He wanted the students to understand the value of standing by their standards, and how that can lead them to their true purpose in life.

With his dedication and work ethic, Boseman made a name for himself. He has been recognized for his accomplishments, and won a multitude of awards because of his roles. From Outstanding Actor in a Motion Picture at the NAACP Image Awards to the Best Actor for both Marshall and Black Panther at the BET Awards, Boseman has truly succeeded and received much recognition for his work. He received all these awards while battling cancer, but he continued through and kept silent about his condition.

Dr. Chester Fontenot Jr., Baptist Professor of English and Director of Africana Studies at Mercer University explained that Black Panther was a huge moment for the entirety of Black people, allowing Black people to see their culture and more on the big screen.

“He already had the respect of the Black community, and a lot of young people who really didn’t know much about Chadwick Boseman – because he had played these Black iconic figures – was different when it came to Black Panther, riding the heels of the superhero; and coming up with Black Panther, that was a huge moment, a huge moment for black people,” Fontenot said.

Fontenot further explained that Boseman created a legacy for himself, allowing Black children, adolescents, adults and elders to see themselves in a light that shined completely on the positives of Black culture rather than the negatives.

“Sometimes we never get to see ourselves in a way such as that, and this is just the beginning for even more films to continue that plan,” Fontenot said.