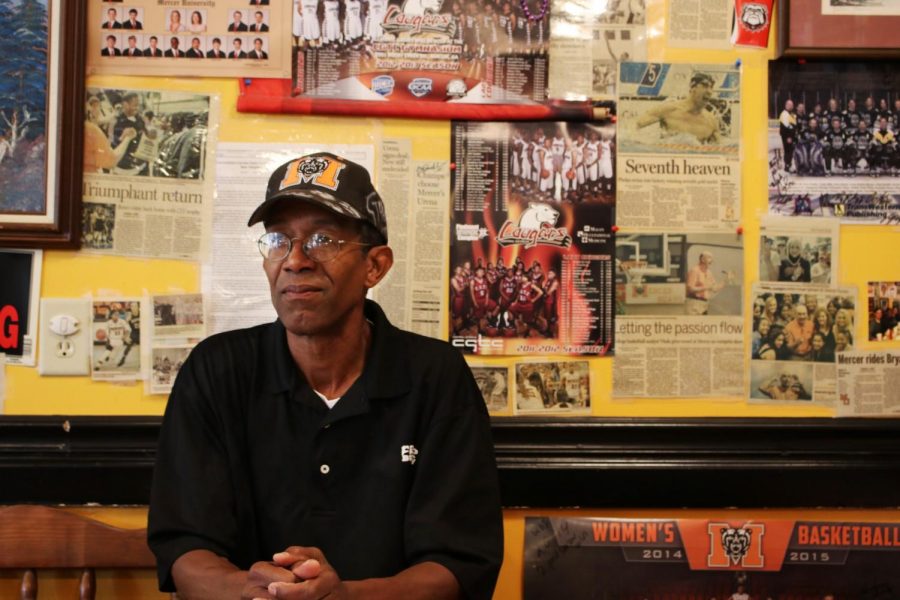 Carl Fambro sitting in front of one of his Mercer University memorabilia filled walls. His favorite part about owning a restaurant is the community involvement and connecting the people of Mercer Village with his chicken wings.

Keren Landman, For The Telegraph

Carl Fambro says West Macon has been left behind. Anchor businesses at its shopping centers — like Home Depot and the Burlington Coat Factory — have moved down the road. The few gyms and youth recreation centers that are still open have irregular hours. Several churches have left.

In 2009, Fambro moved his business, Francar’s Wings, from a spot on Log Cabin Drive to Mercer Village, a retail and restaurant district. The restaurant stopped delivering to the old neighborhood when one of its drivers was threatened during a delivery run.

“I gotta watch out for my folks,” he said.

But Fambro knew leaving wouldn’t fix the area’s problems. Last year, he got a small grant to fund “Peace in the Village,” a community-generated action plan to address Village Green’s most pressing crime and violence issues.

“We can’t come here, but we can’t just let this lie like it is,” he said.
A REPUTATION FOR VIOLENCE
For nearly a century, Macon has had a reputation for significant levels of violence, and for decades, the city’s violent crime rate has consistently exceeded state and national rates. In 2019, Bibb County’s rate of per capita shootings was almost as high as Chicago’s. Macon’s murder rate in the first half of 2020 was one of the highest on record.

It’s not just individual neighborhoods that suffer the downstream effects of violence.

“We’ve lost our character and image because everybody says ‘Macon is a dangerous place to be, Macon’s a terrible place to live,’” said Bibb County Sheriff David Davis, adding that due to those perceptions, “people may not want to live here. Businesses … decide not to locate here. People who are here and have the means to leave — [they] leave. And then that makes our community much, much poorer and less diverse.”

Violence costs cities more than just the lives of its residents; it also costs cities money. The financial toll of violence shows up in the immediate health care and criminal justice costs of the aftermath, but it is also evident in lost income over the longer term, as individuals and businesses — like Fambro’s — divest from communities suffering high levels of violence.

Mounting evidence suggests violence is so financially costly that for cities looking to increase their budgets, reducing violence may be a powerful way to save dollars.
FINANCIAL ARGUMENTS NOT THE OPPOSITE OF MORAL ONES
Although economists have examined the cost of violence for decades, several recent efforts have yielded some estimates of the potential savings to taxpayers that even small reductions in urban violence could produce — often in the range of millions of dollars per homicide.

“Basically, anything you do to address urban gun violence pays for itself many times over, even if it’s only moderately effective — even if it’s expensive, because the cost of a single homicide is so expensive,” wrote Thomas Abt in an email.

Abt is a senior fellow at the Council on Criminal Justice and author of the book “Bleeding Out: The Devastating Consequences of Urban Violence — and a Bold New Plan for Peace in the Streets.”

Several organizations working to reduce urban violence have made a financial case for their work. Among them is Cure Violence, a violence prevention program rooted in a street outreach approach, that has demonstrated dramatic reductions in violence in 25 U.S. cities and 15 countries: a 56% reduction in killings in Baltimore; a 63% reduction in shootings in the South Bronx; 100% reductions in retaliation homicides in five of eight Chicago communities.

You can read the rest of the story here.