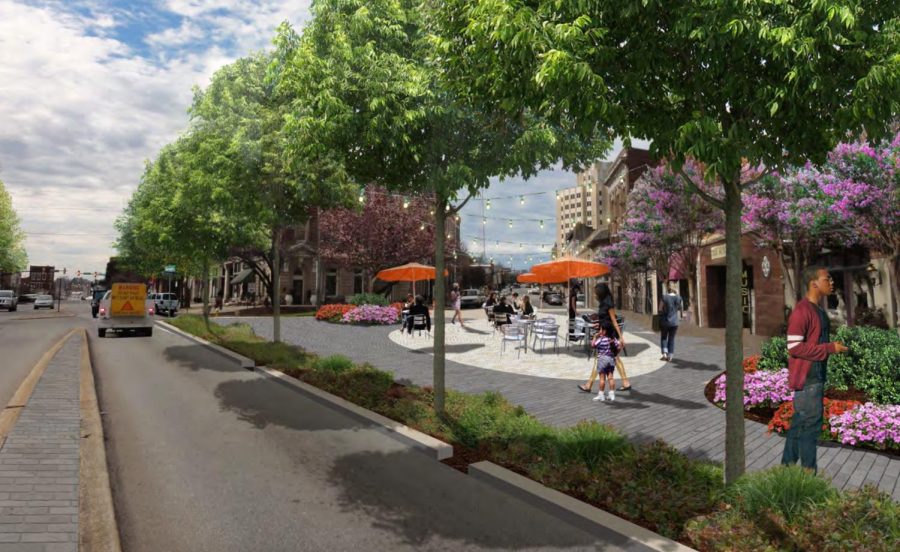 Special to the CCJ

Cotton Avenue Plaza is part of the 2015 Macon Action Plan and calls for relocating the Confederate statue that has recently been vandalized.

“I would just again urge us all to choose your words carefully and be respectful of other people’s opinions,” Reichert said, trying to ward off contention during last Tuesday’s committee meeting.

He reminded commissioners their facial expressions were being shown and recorded during the Zoom conference call that allows for adequate social distancing due to COVID-19.

Commissioner Virgil Watkins introduced his proposal to proceed with the 2015 Macon Action Plan to redesign Cotton Avenue Park, the current site of the Confederate soldier memorial near Second Street.

The statue recently was spray-painted by vandals in the wake of racial tensions following the death of George Floyd at the hands of Minneapolis police. The 141-year-old monument would be relocated to Whittle Park in front of Rose Hill Cemetery on Riverside Drive.

The permit for the pop-up public art display Reichert endorsed around the base of the statue expired Tuesday. The plywood paintings will be part of an exhibit at the Tubman African American Museum, the mayor said.

Watkins said the statue’s erection on the site of Macon’s former slave market and Black business district is one example of its link to white supremacy.

“People all around the country and world know that is the truth about the Confederacy and that statue,” Watkins said. “Once that’s made public why would we, under any circumstance, want that type of thing in the middle of our downtown. I’m not asking for its complete destruction, which I think is a valid argument based on what I’ve just shared. I hope you can understand why I would be offended and my friends would be offended having something like that placed so prominently in our downtown.”

Watkins said the statue’s prominence is embarrassing to explain.

Georgia law prohibits moving any publicly owned monument unless it’s needed for protection, preservation or interpretation. The code also makes an exemption if the relocation is necessary for construction projects.

If a monument is moved, it must be to a site of “similar prominence, honor, visibility, and access within the same county.” The law also says a monument can’t be moved to a “museum, cemetery or mausoleum unless it was originally placed at such location.”

Watkins’ plan called for the statue to be removed within 30 days “to protect against the risk of injury or death to private citizens as a result of or in the course of acts of vandalism or destruction towards the monument.”

Reichert proposed a substitute measure that also would relocate the “Women of the South” obelisk on Poplar Street across from Government Center. That statue recognizes the sacrifices and contributions women made during the Civil War.

““I think that this is a real moment of opportunity for our community to demonstrate that we are in favor of building a more equitable – as Dr. MLK proposed – a ‘beloved community’ where people are not just tolerated, they’re included and embraced as part of the fabric of the community,” Reichert said as he introduced his plans.

Facing a possible legal challenge, the mayor was careful to let the record show that his priority is to improve downtown – moving monuments was secondary, he said.

His resolution states, “Because the Women of the South monument relates to the secession and Confederacy, it is subject to the same risks relating to vandalism, destruction, and public injury or death as the Cotton Avenue monument, and is in need of similar protection for the preservation of the monument…”

The mayor’s measure goes beyond the Cotton Avenue Plaza and adds a roundabout at First and Poplar streets, that was proposed in the 2017 Macon Urban Framework schematic, and includes long-awaited improvements to Rosa Parks Square.

Although the mayor was clear that the Women of the South statue would be relocated for the project, the roundabout schematic presented at the meeting includes the statue and actually provides for a brick plaza to “better represent the existing monument” in what is labeled “Monument Plaza.”

Reichert cited $900,000 from proceeds from the sale of the Willie C. Hill annex building that was earmarked for Rosa Parks Square enhancements. That money is contingent on the county backing $20 million in Urban Development Authority bonds to fund the stalled Marriott Hotel project in the old annex high-rise.

The county could also reallocate $1.1 million dedicated for infrastructure improvements in the Central City Commons project, which is also at a standstill.

Reichert believes private donors and foundations could make up the remaining $3 million needed for the three projects.

Once the initial $500,000 is raised, the Confederate soldier would be moved and Cotton Avenue Plaza will be built. After an additional $1.5 million is available, the Women of the South monument will be relocated and the roundabout built. When the final $3 million is identified, Rosa Parks Square will be revamped.

“You create, then, a very attractive area that is indicative of the path that our community seeks to follow as it goes into the future,” Reichert said.

“I don’t think this project under the guise of improving downtown does anything to promote unity. I think what is does promote is a divisive movement,” Jones said.

He pointed to the lynching memorial erected at the Douglass Theatre and “colored waiting room” sign at the Terminal Station as other offensive relics of a painful past that are being embraced by Black leaders as having educational value.

“I want to see us do some things to make sure all history is being included,” Bivins said. “So much of it is left out. I think that’s one thing that can bring us together. We can disagree on what things mean but we ought to include all history.”

Commissioner Joe Allen wanted to table the discussion until the commissioners could meet together in person, but that measure failed.

Wynn called out the mayor for masking the removal of the monuments under the guise of community improvements.

“We are trying to build our downtown; We’re trying to make it better,” Wynn said. “No sense in adding parks to Poplar when you’ve got these homeless people harassing people, begging for money and attacking innocent people. Those kind of people need to be removed from our streets, not the statues.”

She argued that the commission needs to be more concerned about COVID-19 and crime.

“Don’t come back and tell me this is the most important thing,” she said. “This thing should have been tabled. You cut our citizens off from their comments.”

During the July 7 commission meeting, which limited attendance due to social distancing, emails from more than two dozen citizens were summarized.

“You denied the public hearing these things,” Wynn said. “We need to have a forum.”

On the subject of moving Confederate monuments, 20 people submitted emails and only two spoke in favor of moving the statues.

“I will never understand why one segment of heritage must suffer while another is promoted,” wrote John Wayne Dobson. “Do we not, as a Nation, pride ourselves on the concept of equality? Justice should never sink to the low level of the popularity contest we now call political correctness.”

Renee Sullivan wrote: “The way to unify our community is not to alienation (sic) those of us who love and support our Southern Heritage but to educate and discourage hatred, division, intolerance, and inequality.”

“If you truly want to display togetherness I feel we should exhibit all eras of our history,” Oscar Ferrara Jr. emailed.

“There is so much wrong with Macon and Bibb County today, to focus on this borders on dereliction of duty,” wrote Ken Ward. “With the sad decline of Macon/Bibb county over the last few decades I think you should focus on more important problems.”

Mike Waits wrote: “The Confederate monument argument is only the beginning and an entryway to a slippery slope to move further in de-constructing America as it was founded. This proposal to remove a Confederate monument will encourage more division in our city and the Greater State of Georgia.”

Mr. and Mrs. Stephen Jenkins argued that many Confederate soldiers were buried on the battlefield or in mass graves which led to erection of monuments: “All Confederate monuments are simply memorials the grieving widows, mothers, and family of deceased soldiers had erected, most often with the help and support of the entire community, black and white, in memory of their loved ones. They are not monuments to slavery. They are, essentially grave stones, and should be left alone.”

Terry Cross doesn’t want the statue moved but would support it if a majority of the citizens agreed it should go: “Why can’t we let the people of Bibb county vote on this? Let’s not be intimidated by the mob.”

Fred Bone emailed: “Our monuments downtown represent enormous sacrifices by the citizens of our state. Our monuments are cherished objects that honor Georgians. Please stand and defend our monuments!”

J.C. Edwards said the statue represents a large part of his heritage and threatened to lead a lawsuit if it is moved: “It does not stand in support of slavery. Very view (sic) Confederate soldiers owned slaves. They were primarily fighting for State’s rights to govern themselves and not what the Union dictated to them.”

Katie Powers, who noted her Confederate heritage that includes the man who introduced Georgia’s Order of Secession in 1861, was one of the two who appealed for the removal of the soldier statue.

“This monument does nothing to unite, uplift, and inspire the citizens of Macon. It only serves as a painful reminder of an economic and social order which required the complete objectification of other human beings,” Powers wrote.

Although all the commissioners were invited to ask for a copy of these public comments, only commissioners Wynn and Watkins requested them after the July 7 meeting, said clerk Janice Ross.

As commissioners were preparing to vote on Reichert’s plan in Tuesday’s committee meeting, Commissioner Larry Schlesinger recalled his time living in Richmond, Virginia, where Confederate monuments were routinely vandalized.

“I have no doubt, if we leave the statue, that it is going to be a lightning rod and it’s going to be defaced over and over again if not destroyed completely,” Schlesinger said. “I just think that we need to recognize that it’s time for us to move on and maybe join the 21st century.”

Commissioner Elaine Lucas also is in favor of the projects and monument removal.

“I think it achieves an awful lot,” Lucas said. “I think coming to the end of our term we can make a real statement to the community that we’re all-in about bringing justice and fairness.”’

Lucas worried about how they can guarantee the work gets done as a new administration takes over.

Reichert said the first big step is approving the proposal, and then comes raising money and garnering community support to make sure the plans are carried out.

Commissioners voted 5 to 3 in favor of the three-step project with Allen, Jones and Wynn voting against it and Bivins, Lucas, Schlesinger, Al Tillman and Watkins voting for it. Commissioner Scotty Shepherd was absent.

Watkins withdrew his proposal, which would have required the soldier statue removed within 30 days and stored until a new pedestal can be created at Whittle Park. The mayor’s time frame is dictated by funding.

The resolution will be on this coming Tuesday’s agenda for final approval.

Government Center remains closed to the public for meetings due to the increase in coronavirus cases in Middle Georgia, but written comments again will be accepted.

Those wishing to address the mayor and commissioners on any issue are invited to fill out a comment form online at the county website – www.maconbibb.us.