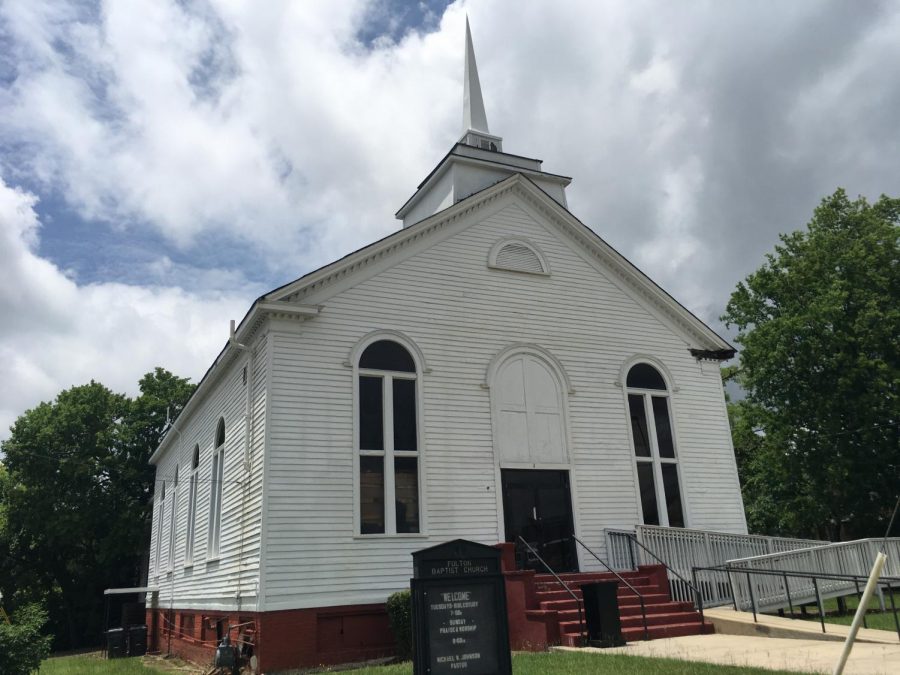 Fulton Baptist church, which is slated to be part of the Hawthorne Commons housing project, is believed to be Macon's oldest church building.

The thought of taking away an historic downtown church from its congregation alarmed Macon-Bibb County Commissioner Virgil Watkins.

Once Watkins learned the Fulton Baptist Church is still active at 506 Hawthorne St., he could not support recently revealed plans to convert it to apartments.

“You lost me at the point of where you were talking about an occupied church that’s operating on Sunday,” Watkins told Mayor Robert Reichert during last week’s committee meetings via Zoom conference call.

We’re not talking about just any church, either, but likely Macon’s very first and definitely its oldest still standing. Its history is not widely known, but touches at least four congregations – both black and white.

Woda Cooper Companies is applying for Low Income Housing Tax Credits to build Hawthorne Commons – an $11.8 million housing development of 48 units for persons 55 and older in at least 80 percent of the dwellings.

The Ohio-based company with an office in Savannah plans to convert the old Virgil Powers school into apartments and erect a new building with two dozen units on a total of 2.35 acres on adjacent lots owned by Macon-Bibb County.

Developers initially wanted to put four apartments in the old white wooden church about two blocks from the jail, but commissioners Bert Bivins, Elaine Lucas and Valerie Wynn also voiced reservations, including about potential alcohol consumption in the building. Other options for the church included a community center or meeting room.

Lucas lamented the loss of the 115-year-old Tremont Temple where Martin Luther King Jr. once preached. The building and the home of African American entrepreneur Charles Douglass were razed in 2014 to make way for a Dunkin’ Donuts on Pine Street across from Medical Center, Navicent Health.

“I hear you loud and clear,” said Woda Cooper’s Denis Blackburne, who pledged to go back to the drawing board and crunch numbers with the company’s partner, Parallel Housing.

When developing historic properties, a brand new unit can be built for every one created in an historic space, Blackburne explained.

Having four apartments in the church would allow for 52 total units, but Blackburne told the Urban Development Authority last week that they have decided to scrap plans for residences inside the church. Instead, they will put a few more units in the school, which most recently served as a transitional center for men coming out of prison.  It has been vacant for several years.

Woda Cooper pledges to put aside $50,000 to rehabilitate the church’s exterior and add a new roof. They would lease it back to Fulton Baptist at no charge, or only a nominal fee, Blackburne said. The church has not been paying rent since selling to the county, UDA executive director Alex Morrison said.

Blackburne told the UDA: “I think it provides a great solution for everybody. The church will stay as a church. It would be renovated and we would still be able to put in a very a solid application to DCA (Department of Community Affairs).”

Reichert applauded Woda Cooper’s willingness to work with the community and alter its plans down to just 48 units, which will cut its profit margin.

“I think it’s a wonderful demonstration of commitment by Woda Cooper to this community and  kind of a partnership that we’re forming to put in this workforce housing,” Reichert said. “I mean, holy mackerel, y’all! A $12 million project for workforce housing in that area of downtown Macon I think is going to catalyze that entire area of the community.”

Fulton Baptist’s heritage of 145 years and the rich ancestry of the building will be preserved in the proposed development.

The congregation of about 50 people, which has live-streamed services recently, considered buying back the church but it was packaged with the school and land for $750,000, which was out of their range, Johnson said.

Bibb County bought the school for $1 million dollars in 2009 and leased it to the state for the Department of Corrections’ use.

Bibb County purchased the church from Fulton Baptist for $150,000 in 2013 and turned it over to the UDA for future development along with the school, which dates back to 1912, according to Telegraph archives.

The church, designed by architect Elam Alexander as he was working on the Bibb County’s first courthouse, was completed in 1829 to house Macon’s First Presbyterian Church. The congregation of 25 people moved in just six years after Macon was founded.

By 1937, the congregation outgrew the building, which was originally located between Poplar and Plum streets on Fourth Street, which is now Martin Luther King Jr. Blvd. They built a brick church down the road between Walnut and Mulberry streets. That old portion of Fourth Street is now known as Broadway.

Architect Alexander, who was married in the old wooden church, purchased it from the Presbyterian congregation.

About a year later in 1841, Alexander sold the church and the land for about $1,500 to the Catholic Diocese of Charleston to establish the Church of the Assumption of the Virgin Mary.

Rev. James Graham, who led Macon’s first Catholic congregation, died about a year later and his remains were buried under the altar.

In the mid-1860s as the Presbyterians moved to their present location on Mulberry Street, the Catholics planned to take over their brick church and sell the first wooden building.

After appealing to Pope Pius IX, the pontiff decreed the building could be sold if it were dismantled to keep it from being “converted into sordid (vulgar) use,” according to the “History of St. Joseph’s Parish” written by the late Sister Mary Elizabeth Sheridan.

In 1866, a Telegraph advertisement using capital letters for emphasis touted: “MONEY CANNOT BE BETTER INVESTED THAN IN REAL ESTATE in this city. This is admitted by everyone and no property is MORE DESIRABLE than that splendid LOT known as the CATHOLIC CHURCH LOT… a fair inspection would convince anyone.”

The lot did sell for $25,000, the Catholics moved, the remains of Rev. Graham were removed to the chapel at the Catholic cemetery in Savannah and the building was purchased by Second Baptist Church for $800.

The church was taken apart, moved to 506 Hawthorne Street and became the home of the Second Baptist congregation from its dedication in July of 1868 until 1887.

Beginning in 1875, the Fulton Baptist Colored Church began meeting somewhere on Third Street. It’s not known if that congregation originally gathered on Fulton Street near Fort Hill or whether it was named for a prominent member of the church, said local historian Muriel Jackson of the Washington Memorial Library.

The congregation is celebrating its 145th anniversary this year, Pastor Johnson said.

One of its greatest artifacts is the old bell that was once in the steeple, but removed for safe keeping.

“I have a bell that is actually inside the church,” Johnson said. “We took it down from the steeple.”

He’s been trying to have it appraised to learn more about its value.

For the Hawthorne Commons project to proceed and to give a boost to the tax credit application, commissioners will have to finalize loans totaling about $575,000, a 45-year ground lease of $100 per year and other building agreements with Woda Cooper, which is suing the city of Warner Robins over another planned development that fell through in that city. The buildings and improvements made will go on the tax rolls.

Commissioner Lucas was adamant about holding a public hearing on the redevelopment before Tuesday’s vote. She cited recent complaints about the lack of public input in renaming Central City Park in honor of Carolyn Crayton, the founder of the Keep Macon Bibb Beautiful Commission and the International Cherry Blossom Festival. Although Commissioner Watkins urged the mayor to veto that park resolution, Reichert signed the measure last week.

For the first time since March, the public is invited to comment in person on the Hawthorne Commons proposal beginning at 4 p.m. Tuesday at Government Center. Social distancing will be enforced and masks and hand sanitizer will be available.

The 5 p.m. Committee of the Whole and 6 p.m. Commission meeting will be closed to the public and media but will be broadcast live on Facebook and at www.maconbibb.us.