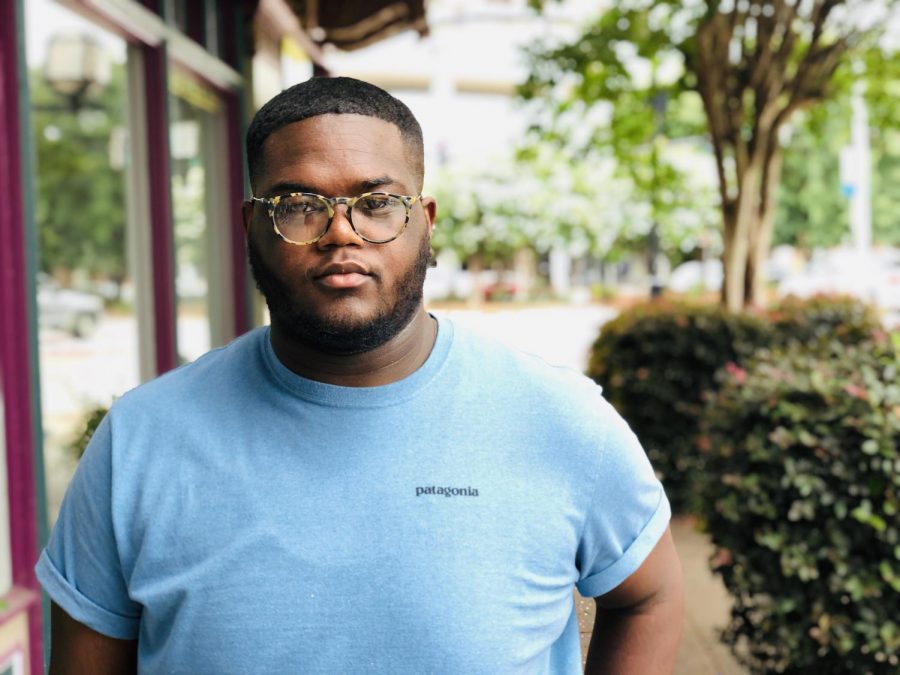 Southern Souls is a story-telling series that offers a personal look into the lives of people around us, showing that all souls can relate to one another through our laughter and tears, successes and failures. In keeping theme with the Black Lives Matter movement, we’re temporarily shifting the focus of the series to highlight what some have perceived as racially motivated incidents that have had lasting impacts on black people living in Georgia. The goal is to discuss, educate and grow as a community, so that we can all come together and create a more inclusive environment for generations to come.

I met JT while working on special projects with the Otis Redding Foundation. 16 years my junior, the only way that I can think to describe him is as an “old soul”. That’s what my parents used to say about a young person who acted wise beyond their years. His demeanor comes across as reserved, thoughtful and quiet; but the more you get to know JT, the quicker it is to see how truly focused, driven and exceptionally talented he is, especially with digital design and development.

On the day of our interview, I met JT in the back of a coffee shop, around the corner from where he works. He was just as calm, cool and collected as he always is, and had no reservations in answering me when I asked him his thoughts on the latest Black Lives Matter movement and the effect that all of this can have on a young, black mind such as his own.

“It leaves me on pins and needles,” he said. “I’m always over thinking a situation, over thinking a conversation, you know, what or how do I compromise (with society) without overly compromising myself? It’s always a deep thought, just filtered. I can’t even almost breathe all the way trying to have conversations or trying to get to where I’m going. It leaves me drained after a day of just minding my own business, which is ridiculous.”

If you’re minding your own business, what is there to over think about? As he explained, it’s the little things that happen during the course of a day to someone who looks like JT.

“I had a moment walking past the coffee shop and this (white) lady grabbed her purse and moved to another part of the sidewalk. I didn’t even get a chance to speak to her; she just panicked,” he told me.

“It scares me, especially the Ahmaud Arbery situation because it’s so close to home. This is down the street. It could really be any of us at this point. But you try your best to persist and not walk around with paranoia or feel uncomfortable sitting alone at a restaurant, feeling stared at walking into a store; but I carry that paranoia,”  he said. For example, in reference to Arbery, “A week after the video surfaced, I took a walk around the Vineville area and the whole time I’m shaking. I’ve never struggled with anxiety previously, but as I walked, I immediately dwelled on how quick Ahmaud’s future was snatched from him by jogging. I started losing my breath as if my life could easily be gone by just walking around a what is seems to be ‘safe’ neighborhood.”

I asked if it has just been later in life that he noticed some people seeing his skin color as a threat? In a word: no. It started in childhood.

Throughout lower and middle school, there were some white teachers who would, he said, “automatically assume something about me due to my demographic or where I’m living. I’ve had to watch some of my white friends separate from me and put me in this category where I don’t belong,” he said. “I wondered, where did you pick up this idea of me? Why can’t I be with everyone, like in group projects together even? Those minor things that I’ve encountered left me as a 13 year old kid in science class trying to figure out why is [the teacher] talking to me this way? Why am I sitting out and I didn’t do anything? My peers are outside, just hanging out and I’m in the classroom. I can’t even begin to think what I did wrong. I’ve had to deal with a lot of that, especially in school.”

I figured his school must have had to lack diversity, but he said it didn’t.

“Some teachers were at the age where they were kind of stuck in their ways; that’s just who they are. But getting through that was one of the most traumatic, definite profiling, stereotypical issue that I’ve encountered.”

He seemed oddly at peace with it, but it’s difficult for me to imagine him as a child, a little boy, feeling left out and ostracized by some classmates and teachers. Even now, as I stand several inches shorter than JT, it’s difficult to imagine how someone could see him as a threat at all, but it happens, regardless of the things he’s been taught to do to lessen it.

“When you go to the store, don’t put your hands in your pockets. If you come across a policeman, don’t be too aggressive. If they say move, then you move. Just watch how you respond so you won’t have any issues.” And if an issue arises anyway, I asked? “I just pray someone has a cell phone,” he replied.

For JT though, hope is definitely still alive.

“I think more parents are educating their kids to know their rights and speak up a little more, which is scary, but it’s important for us to not be fearful and lose our humanity,” he told me, adding, “It’s my hope and prayer that this awareness hits spaces where we can’t go right now because of people in certain positions. I pray this awareness hits Congress and hits the government because that’s where  it all lies at the end of the day. Seeing people who don’t look like us marching with us, seeing them take the time out to confront the ones that they now know, too, are out of order and may say something problematic on social media, I’m grateful for that. It took long, and I hate that so many people had to die to even get to where we are now, but I appreciate the support from our white peers, our Asian peers, people overseas even taking the time out to protest, I appreciate that. I commend Macon. To see the community coming together to protest, march and pray; I take my hat off for all of us taking the extra step and doing it the right way and really showing a different side of who we are as local people. I love it. I love seeing it.”