Fighting Back – A Southern Souls Story 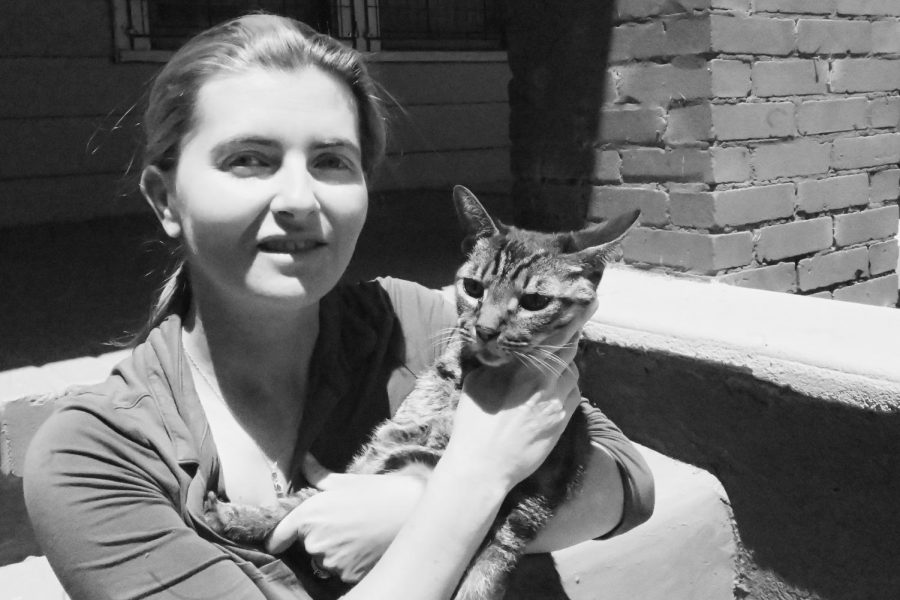 Above: Rebecca with her cat, Chester.

Southern Souls is a story-telling series that offers a personal look into the lives of people around us, showing that all souls can relate to one another through our laughter and tears, successes and failures.

“I met my ex-husband in middle school when I was 11. On Friday nights, kids would go to ‘Dazzles’, which was a roller skating rink that also had an arcade. So, he would go there and play video games with his friends and I would roller skate with my friends. That was about as much contact as we had growing up. When I was 25, I had just gotten my first apartment by myself and I started a MySpace page to meet people because I was in Atlanta, and I hadn’t really made any friends yet. He looked me up and asked me if I wanted to go out to dinner and maybe see a movie and I said, ‘sure.’ It just happened to be Valentine’s Day so he took me to see ‘Norbit’, which is a crappy movie, and we had Chick-fil-a. After that, that’s what we did. Every Valentine’s Day, we’d go see a crappy movie and eat fast food. He wanted to spend so much time with me and listened to me when I talked, even if he didn’t always agree with me. He would buy me flowers a lot. He would surprise me at work and take me to lunch. You know, little things like that; that really meant a lot to me. But he never liked to go hang out with any of my friends. He called them bad influences. Even some the women in my family would go bar hopping and things like that. He sort of looked down his nose at that and thought it was ‘lewd behavior’ as he called it, so I eventually stopped doing that because it made him uncomfortable.”

The couple dated for almost two and a half years before moving in together and getting engaged.

“I was in the kitchen and I was cooking; he just walked up and put the ring on my finger and then walked out of the room. That’s how we got engaged. I felt cheated; when you’re growing up with your girlfriends, you hear all these wonderful stories about these big, beautiful moments when a man asks you to marry him. I never told anybody that story I didn’t want to share because it I felt like I was a foregone conclusion at that point. I mean, I honestly loved him I wanted to make his life better. He came from a traumatic background. So I wanted to show him that, you know, with love, life can get better. I think that’s why I went ahead with the wedding. There were some nights when he would accuse me of cheating on him, which I never did. He would get mad that we didn’t have any money, even though he’s the one that spent it all. He had 10 credit cards in his own name, thank God, but that he had maxed out and that was about $30,000 right there. I started eating more and relaxing on my exercise and I gained about 15 pounds, which doesn’t seem like a lot, but to him, it was not acceptable. The intimate part of our relationship. There was a lot of verbal communication about how he felt about my weight gain; ‘I’m not going to touch you because you’re, you’re ugly’. When I wasn’t losing weight fast enough, he got a prescription for phentermine and insisted that I take it. It is a medical weight loss drug. At one point I was down to 98 pounds, and it still was not skinny enough for him. I was required to weigh myself every day. If I gained a certain level, then food was taken away from me I wasn’t allowed to eat. He would publicly humiliate me about how much I weighed. He talked to everybody about how I didn’t have any respect for him and say ‘look how fat my wife is now’ and things like that. None of his friends said anything. They never stopped him.”

“One day I came home late, and he was angry at me for it but instead of yelling at me like he normally would do, he fumed around the house for a couple of hours. When I was in the bathroom brushing my teeth, he picked up [my cat] Chester. Chester saw himself in the mirror and doesn’t like mirrors he never has. He started to squirm. Instead of just putting him down, my ex-husband pushed Chester towards the mirror, and Chester freaked out and he scratched him. Instead of letting him go, he slammed him into the floor and started to choke him. And that was it. I dropped my toothbrush and I started to hit him and yell things at him. I really don’t honestly remember what I was yelling. But that night, I locked the bedroom door and kept by my cat’s in the bedroom with me. The next morning I called my friend and asked him if I could stay. While my ex-husband was out on a run with his friends, I packed up everything I could into my car and took my cats and I went to my friend’s house. That was the next day.”

Rebecca proceeded to hire an attorney and get a divorce. After weeks of legal wrangling, she was able to access a joint storage unit to retrieve her things.

“He had gotten there before me and had destroyed a lot of stuff, including our wedding album which he, from what I understand because my sister wouldn’t let me look at it, ripped pages out, shredded some pictures and actually peed on it. A lot of my paintings, he destroyed; he just ripped them all up. My furniture was no good anymore because it had been ripped up or destroyed or whatever. My sister and I took what we could and I left. The rest is history.”

Rebecca and her ex-husband were married for nearly seven years.

“He sent me an email about I think it was a little over a year ago with an apology. He had found my diary in a box. He sent me an email saying he was a monster to me and ‘I’m so sorry’. But that was the last contact that I’ve had with him. I did not respond. I want other women to know that you are worth more than that person is telling you that you are. It may feel like you’re alone but you’re really not; listen to that voice in the back of your head that saying something is wrong. This isn’t okay. And there are lots of places you can go to get help.”