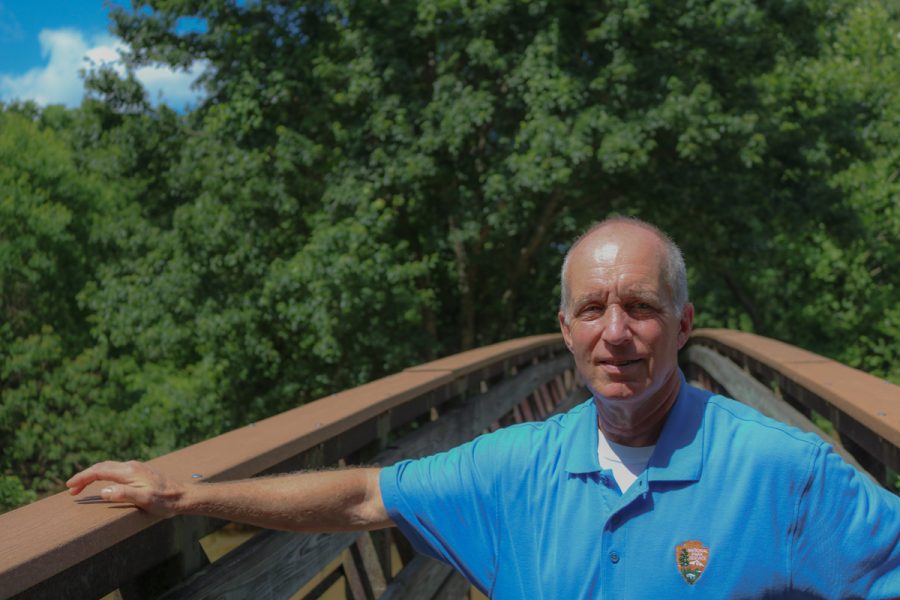 Ocmulgee National Park Supervisory Biotechnician Allen Huckabee details his experiences with invasive species as he attempts to bring native species back in the Macon community.

Even at a young age, Allen Huckabee fought to tackle all of the aspects of his environment by attempting to capture snakes in his backyard. He has since ventured out to conquering invasive species as a National Park Service employee at Ocmulgee National Park.

At the age of 3, Huckabee visited the then Ocmulgee National Monument, discovering his newfound attraction to the wildlife of plants.

“My first memory of Ocmulgee was in about 1956 and I came (to Ocmulgee Park) with my mother, and after we went home, I went into the backyard with a spoon with the intention of building in an Indian mound,” Huckabee said.

He’s lived in Macon for his entire life and graduated from Mercer University with a degree in biology. Later in life, he decided to volunteer at the same park he grew up going to and was hired as a biotechnician. He has now been working at Ocmulgee for 12 years as a Supervisory Biotechnician.

“Well when I first started to volunteer, I did basically anything that they wanted me to do including picking up trash and cutting grass,” Huckabee said.

As a biotech, Huckabee specializes in the invasion of exotic plants. From Chinese tallow to swamp chestnut oak, Huckabee focuses on the larger effects certain invasive species have on the environment. Due to the monoculture of various invasive species, native species are unable to grow.  His main goal is to bring back Macon’s native sugar cane in order to remove the Chinese privet.

“We’re  ( the Ocmulgee team)  hoping that by planting the river cane behind the privet that it can get well enough to establish, so that we can cut down the privet that’s in front of it.”

Ocmulgee has a wide range of species in the park, often leading Huckabee to use creative methods to remove them. Once an invasive species begins to grow, it is hard to remove them from the environment, as Huckabee learned.

“I have to go through basically every area of the park that we’ve been through previously and re-trace it looking for exotics because they’re very aggressive and will come back if you don’t keep on top of them,” Huckabee said. “I usually take a chainsaw and a chipper and go into the woods and remove exotic species that we find there.”

During his work, Huckabee often encounters many challenges. The rapid growth of invasive species mildly affects the native species, causing him to have to destroy these species. One of these bothersome species is the Chinese tallow, a species that was introduced to the United States in the 1700s.

“The hardest challenge that I have is Chinese tallow which is a tree that gets to be probably 50 or 60 feet tall,” Huckabee said. “Your mother and mine probably planted them because of the foliage being pretty in the fall. Supposedly, Benjamin Franklin first brought them here because they used the berries to make candles out of.”

Although Huckabee has an intern to help take some of the weight off his shoulders, he suggests that the park could use more help from volunteers.

“Occasionally I have volunteers to come in and work with me, but it’s not easy work. I have a couple of volunteers that over the years have been consistent which has helped me a lot,” Huckabee said.