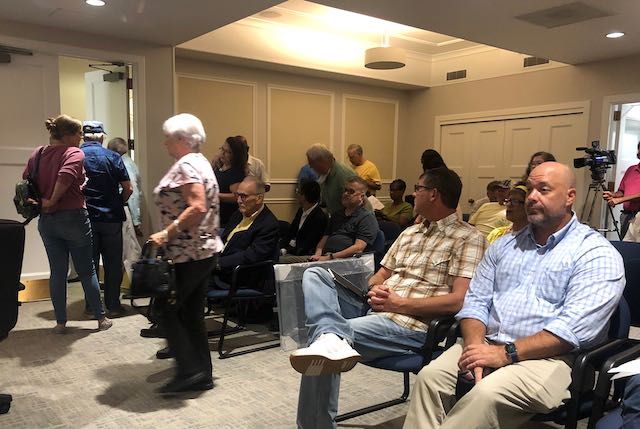 Neighbors in opposition to a proposed business center on Hartley Bridge Road leave Monday's P&Z meeting when the developer asked for an extension to allow time to meet with neighborhood representatives about the project.

Macon-Bibb County Planning & Zoning commissioners have more time to ponder a couple of proposals – a commercial development on Hartley Bridge Road that drew about a dozen people in opposition Monday, and the Otis Redding Foundation’s Center for the Arts.

At the start of the meeting, developer Tony Widner asked for a deferral for his proposed commercial office building at 3607 Hartley Bridge Road. He wanted time to talk to neighbors as many of them were seated all around him in the crowded meeting room on the third floor of Terminal Station.

Several residents huddled to discuss how they would best present their argument for denying the application. One man brought a map that stretched across two easels.

Widner wants to build a 6,000-square-foot building with six 1,000-square-feet spaces to sublet for small scale commercial outlets or business offices in the suburban residential area.

“The issue is just the character of the development,” P&Z Executive Director Jeff Ruggieri said in the administrative meeting before the hearing. “It just doesn’t seem to fit right and the neighborhood is in objection.”

Commissioners agreed to hear testimony Oct. 24 and the neighbors stood to leave the meeting.

When Chair Jeane Easom chided them to quiet their conversations on the way out as the hearing was still underway, one of them called back, “You ain’t got much of a meeting now. We’ll be back.”

Commissioners also agreed to move consideration of the new Otis Redding Center for the Arts at 436 Cotton Ave. to its Sept. 12 meeting.

The Design Review Board staff deemed the modern design of the new building incompatible with historic downtown and not appropriate. Initial plans call for a new one-story building fashioned out of white stucco with a large, blue aluminum bi-fold screen with a lighted sign that juts up from and wraps around the corner of the building. A tall, one and a half-story, glass connector will join the new center to the adjoining historic brick buildings on that block across from Hotel Forty Five.

“According to the documents presented by applicant, the new addition to the existing building does not have any features that are compatible with, complementary to or in any way define the overall historic character of the central business district in downtown Macon,” the staff report stated. “It would be an outstanding and highly impressive building in another location, but not in the middle of the historic Central Business District.”

The report further stated that “new construction should never compete with nearby historic buildings.”

After the report was made public, applicants Karla Redding-Andrews and architect Bob Brown asked that the item be deferred so that they could make changes.

P&Z will take up the matter after the Design Review Board weighs in on Sept. 6, but planning and zoning staff said they have not seen any new drawings yet.

During Monday’s meeting, a couple of P&Z commissioners indicated general support for the project but did not comment on the design.

As P&Z commissioners considered a new residential window and sliding door manufacturing plant in south Bibb County, they got their hands on a sample piece of plastic window framing that will be created there. P&Z approved the YKK AP America manufacturing plant going up in the Macon-Bibb County Industrial Authority’s I-75 Industrial Park on nearly 50 acres behind Tractor Supply off Sardis Church Road.

The company plans to invest $125 million dollars on a one-story, 365,500-square-foot production and distribution facility with an additional 12,400 square feet of office space and a separate building featuring 7,500 square feet of space for recycling materials. The recycling facility will not be heated or cooled, according to the application.

The architectural products company, which also has a plant in Dublin, has been leasing space from YKK USA, a sister-company that opened its zipper and fastener factory off Ocmulgee East Industrial Boulevard in the early 70s.

YKK AP was shopping for a new home for that east Bibb County operation and decided to move its 250 workers to the south side of the county and eventually add 100 more employees in coming years.

“We feel we can double our output in this facility from what we currently do,” Hultquist said.

Chair Easom expressed concerns the company was abandoning its Ocmulgee East space, but Hultquist said YKK USA will continue its fastener manufacturing operation in the facility that YKK AP has been leasing.

“The zipper company is going to stay there,” Easom confirmed. “Will it expand and use that space?”

“I expect it will, but I can’t say,” Hultquist said.
Kennel expanding, new Riverside RV lot coming
When Southern Paw’s Boarding and Daycare opened in 2016, the pet boarding facility at 3910 S. Walden Road was approved for 26 kennels. Monday, P&Z gave permission for 18 more in a 30’ X 50’ metal building to be built on site.

The three-acre parcel already houses a 2,400-square-foot former home converted into a kennel.

“I will say there is a demand,” Hulett said. “This whole thing is for some larger dogs. Not many people in the business are equipped for larger dogs.”

The board approved the expansion on the property, which is across the street from the back side of Glen Haven Memorial Gardens, which fronts Houston Road.

Business owner Tabatha Cooper said she wanted to move her non-motorized RV sales lot in Byron closer to her home in the Vineville neighborhood.

Cooper’s brother, Dusty Cooper, said the .81-acre lot which sits off Riverside is now overgrown and once housed a daycare center.

“There’s vagrants in there, trespassing. It’s been a really bad place. We see a lot of potential in there. We’re going to fix it up, make it look a little better,” he said.

The business does not plan to use the abandoned daycare and it will remain boarded up, the Coopers said.

A new building will be brought in for office space, but until Ms. Cooper can hook up plumbing, the health department will allow them to have a temporary portable potty on site.

Most of Roman RV’s clients learn of the inventory online and schedule appointments to see and purchase vehicles, which range in size from about 8 feet to 45 feet in length.

Tabatha Cooper does not expect to have more than 10 campers on the lot.