The Macon Newsroom • May 26, 2022 • https://macon-newsroom.com/13549/for-the-people/georgia-families-struggle-with-formula-shortage/

Marshall Reimer was itching to eat.  It had been several hours since his last meal, and he eyed his mother tending the pot of water on the stove.   She swirled rhythmically, then lifted breakfast from the saucepan and shook it off.  Ten-month-old Marshall squealed with delight.

“He sees that bottle,” said Wesley Reimer, reaching down to pick up his son.

“Marshall, you want the bottle?” added Maggie Reimer, holding it just beyond his reach.

It would be just a regular weekday morning if Marshall was not home sick with his fifth ear infection and the Reimers, who live in Macon’s North Shirley Hills neighborhood, were not stressing about their supply of formula.

Nationwide, 43% of baby formula is out of stock right now according to Datasembly, a company that tracks the shortage in real time.  A single factory is at the root of the shortage. Abbott Nutrition produces leading brands like Similac.  The company’s plant in Sturgis, Michigan has been closed for more than three months because of bacterial contamination problems. 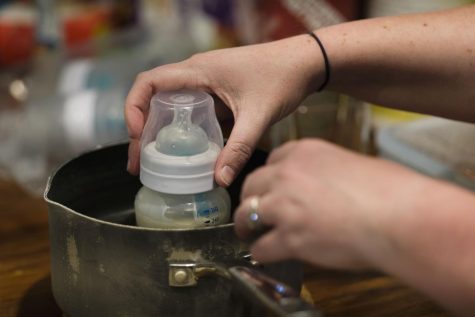 On May 18, Children’s Hospital of Atlanta told an Atlanta television station that “a few patients”  with “complex medical issues” were hospitalized because they are not able to get the specialty formula they require.   That same day, President Joe Biden invoked the Defense Production Act, which means manufacturers all along the supply chain — from milk, lactose and oils to the cans and labels — must prioritize companies that produce formula over any other customers.

Biden also announced what the White House is calling “Operation Fly Formula”, which authorizes the Department of Health and Human Services and the U.S. Department of Agriculture to use Department of Defense contracted commercial aircraft to pick up overseas formula that meets U.S. health and safety standards.  The first international shipment — more than 70,000 pounds of formula — arrived Sunday, and Biden’s top economic advisor told CNN that it should be showing up in stores “as early as this week.”

For many Georgia families, that is welcome news, but there is still a lot of uncertainty about how fast the infant formula will get onto shelves.

There’s no way to know exactly how many families are affected by the shortage.  The American Academy of Pediatrics recommends that infants be exclusively breastfed for the first six months, but according to the Center for Disease Control and Prevention, by six months nearly 75% of infants are getting  some formula or exclusively formula.  Infants in the Southeast are less likely to breastfeed than those in other parts of the country, though Georgia’s breastfeeding rates are higher than Florida, Alabama, Tennessee and South Carolina.

Maggie Reimer had planned to exclusively breastfeed, but it was a lot harder than she anticipated.

In the first few days after birth, a mother often needs to nurse her baby 8 to 12 times in 24 hours, day and night.  Each feeding can last 20 to 30 minutes.  At two weeks, the Reimers started giving Marshall a bottle of formula at night.

“That was really just for my sanity because I was tired and you know, I think I had a little touch of postpartum depression, honestly,” Maggie Reimer said, adding that having Wesley give Marshall the nighttime bottle allowed her to get more sleep, “and that really, just, it helped a lot.”

For the first few months of Marshall’s life, Wesley was the stay-at-home parent, but in January he started substitute teaching and Marshall started attending daycare.  Marshall still gets breastmilk — Maggie, who is the marketing manager for Girl Scouts of Historic Georgia, pumps at work — but they also supplement with formula.  There is only one kind of formula that doesn’t cause Marshall to projectile vomit and it is hard to find.

“I think an issue is people hearing that there could possibly be a shortage and then going crazy,  kind of like what happened two years ago with the toilet paper,” Wesley Reimer said.

“I was in Walmart recently and there was a man who had no less than 15 of the 32 ounce bottles in his cart, and he was just like a robot grabbing case after case,” Reimer said. “And I’m just standing there, like, hey are you gonna let me at least get one case in there?”

Reimer was able to grab two cases, but more often than not he has to drive store to store hunting for it.

Some families don’t have that option.  Heath and Abbey Patterson live in the small Worth County community of Scooterville.  The Pattersons are farmers.  Heath also works full-time as a  paramedic and Abbey runs the Brassy Peach Boutique out of a renovated school bus.  They have a two year old named Stetson, a 10 month old named Anna Lynn and another baby boy due in October.

Abbey wanted to breastfeed Stetson and Anna Lynn, but she could not produce enough milk.

“I’ve read that it’s not genetic,” Abbey said, “but every woman in my family over the past four generations has had major issues breastfeeding.”

One recent study suggests that there could be a genetic component to low milk supply.

“We’re 45 minutes to Sam’s.  Even to a regular grocery store, I’m looking at an hour by the time I drive there and back because we’re ten miles to the closest gas station even,” Abbey Patterson said.  “So I like to have a couple cans on hand, that way I don’t go, oh gosh, we’re getting low on formula, let me go make a trip that’s going to cost me $20 with the way gas is right now.”

She has been to several different stores over the last two weeks, but hasn’t been able to find any of the formula that Anna Lynn can tolerate.  She estimates that right now she has about ten days worth of formula on hand.

Dozens of parents have shared their frustration on a 13WMAZ Facebook post that has more than 350 comments.  Some of the comments are helpful: “There’s Similac 360 at the Walmart on Gray Highway.” Others suggest recipes for making homemade formula “like mothers did in the old days.” The American Academy of Pediatrics warns that can be dangerous.

Many of the commenters insist “breast is best”,  but for many families breastfeeding is not an option.  Maybe the mother doesn’t want to breastfeed.  Maybe the baby is being raised by grandparents, adoptive parents or two dads.  Some children have very specific dietary needs that necessitate formula, even when they are no longer babies.

“A lot of the comments were pretty disheartening,” Warner Robins resident and new mother Brianna Paxton said via direct message.  “Mom-shaming, formula-shaming, blaming, etc. is not helping these families in any way. I think it’s important to remember that everyone is just trying to do their best and get their babies fed–whatever that looks like for them.”

Paxton’s five-week-old daughter was born with a lip tie.  The skin of her upper lip is attached to her gum in a way that prevents the lip from moving, which makes latching onto a nipple very difficult.  She cannot get the procedure to fix the problem until June, so Paxton has been furiously pumping breastmilk and supplementing with the only formula her daughter won’t spit up.  But it’s really hard to find.

“Desperately going from store to store just to come up empty handed is absolutely devastating,” Paxton wrote.  “No parent should have to be terrified about not being able to feed their baby.”

Brenda Lewis, a volunteer counselor with the Middle Georgia Chapter of Breastfeeding USA, says she has seen an uptick in the number of mothers reaching out to her for help.  She said that although she cannot directly attribute it to the formula shortage, there are many breastfeeding families — including some who breastfeed exclusively — who are worried.

“It kinda takes away a security blanket for these mothers,” Lewis said. “I’ll admit even for myself, if my breastfeeding wasn’t successful, well, there’s always formula.”

On Friday, the Georgia Department of Public Health announced a temporary moratorium on a federal policy that has previously required the state to destroy thousands of cans of returned, but still sealed baby formula. The move will allow Georgia’s Women, Infants and Children program (WIC) to donate the returned formula to others who need it.