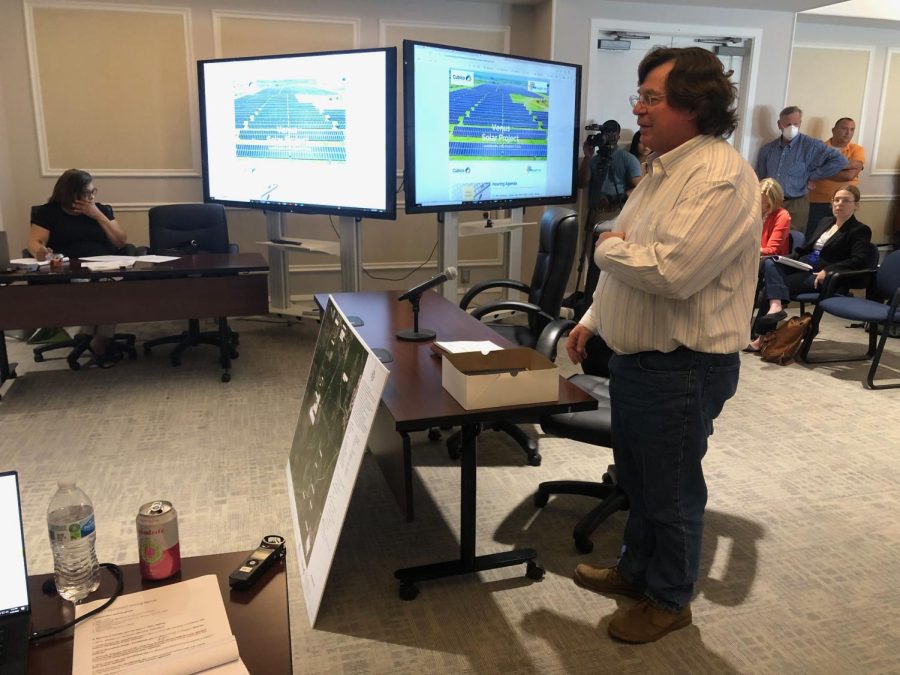 After about a decade of trying to transform a city block, downtown Macon real estate developers cleared zoning hurdles for a new hotel and apartment building, but a decision on a proposed solar project in west Bibb County awaits an upcoming town hall meeting to try to win over neighbors.

Monday, the Macon-Bibb County Planning & Zoning Commission meeting was packed as several neighbors came to share concerns about plans to turn 780 acres of rural land into one of Georgia’s largest solar fields off Fulton Mill and Mount Pleasant Church roads.

Cubico Sustainable Investments, through a Venus Solar subsidiary, wants to build a utility-scale solar photovoltaic (PV) generation facility with a battery energy storage system to provide renewable energy to the Georgia Power Company transmission grid, according to the application.

The application pledges Cubico will operate the project for 35 years.

Hemal Shah, a PVinsight company consultant working with Cubico, said the project has been in development for about a year. He said a 100-foot buffer of trees is planned and the electric motors that move the solar panels with the sun won’t be heard beyond about 30 feet.

“Have you had conversations with any of your potential neighbors?” P&Z Commissioner Gary Bechtel asked Shah.

Shah explained the companies have been busy acquiring land, performing environmental and cultural studies of the property, conducting engineering and wetland studies, habitat assessments and endangered species surveys while applying for a partnership with Georgia Power.

Shelley Wade has lived on Marcar Road for 34 years and was the first to speak against the project, which she feels will diminish the value of her home.

“I’m in distance of property values declining because of this ocean of solar panels. So, I oppose it vehemently,” Wade told P&Z commissioners.

Jeanne Brewer, of Sandy Run Drive, also opposes the project because of the anticipated harm to natural habitats.

“Where we are we have a lot of woods, wildlife,” Brewer said. “How is it going to affect the wooded areas, the wetlands, the animals, birds, wildlife? This is not something I want to see in our neighborhood. I’ve seen it enough driving through south Georgia.”

Allen Marsh, who has 188 acres on Fulton Mill, also voiced concerns about the potential impact to the environment.

“I’m not convinced this won’t have an adverse effect,” said Marsh, who pointed out the Macon-Bibb County 2040 Comprehensive Plan calls for the property to be suburban residential.

Daniel Matthews, who lives on Sandy Run, shared concerns that the neighborhood roads won’t be sturdy enough for the heavy trucks during construction.

Helen Rutledge submitted a written objection: “Our quiet little neighborhood where children play will turn into a construction zone hauling big equipment in and solar panels.”

As Shah tried to answer the residents’ concerns in the few minutes remaining in his allotted time for rebuttal, Bechtel suggested they defer the project so developers have more time to explain the project to neighbors.

The project representatives asked for at least a month to set up a town hall meeting with community members.

P&Z is scheduled to take up the project again on May 23.
Central City Commons cleared for now

Local developers Tim Thornton and Miller Heath III and investors Opterra Capital got the P&Z approvals needed to transform a downtown city block, but could soon be back before the planning board with another parking deck proposal.

The Macon-Bibb Planning & Zoning Commission deferred the project two weeks ago to clear up concerns about property ownership, adequate parking and potentially limiting access to current parking spaces for nearby condo owners.

The Design Review Board also originally rejected the design for a new boutique hotel at 678 Poplar St. and the Crescent Corners six-story apartment building at Second and Plum streets.

Last week, the Design Review Board approved façade changes to the hotel but still didn’t like the revised design for the apartments. Board members said it was too “top heavy” with architectural elements added to mimic a nearby building. That design was not approved.

DRB is an advisory board, but P&Z makes the final decision.

Naomi Mirsky, of Opterra, presented commissioners with a newly revised plan that tries to address some of the DRB’s latest issues.

“We’re in a challenging situation because we’re getting into the realm of design by committee and we don’t want to go there,” Mirsky said. “We want to make sure we get it right. There’s no reason we can’t make a beautiful building we can all be proud of.”

“I think this is a good-looking building. I’m not an architect, I’m only an appraiser and this looks good to me,” Easom said.

Easom also commented on Design Review Board concerns the building was too big.

“We’ve got to go up. We’re running out of room,” Easom said. “Every building we do doesn’t have to be the Taj Mahal sort of thing.”

Commissioners also learned the developers have a purchase agreement for Larry Bush’s Riverside Tire on the corner. Plus, they control enough other property to build a four-story parking deck behind the hotel. That deck alone in the interior of the block would satisfy parking requirements, Mirsky said.

That new layout also widens the alleyway from Poplar Street for Exchange Building condo owners to access their parking spaces and allows enough room for fire trucks to get through.

“We are looking at the possibility of doing a larger scale parking project but that is something that is part of a larger process with other parties involved,” Mirsky said.

Mirsky’s presentation Monday convinced commissioners to proceed as is, – for now.

“This commission appreciates your efforts and making sure what you do is only on your property and doesn’t impede the other parcels but improves it,” Easom said.

Jim Rollins of the Summit Group wants to tear down the existing store built in 1966 and a 1929 brick building that most recently housed Darrell’s Restaurant and Lounge.

“I admit this is going to be an improvement over what is there, I think,” Easom said.

Commissioners want to see where fuel tanks will be located and learn more about how refueling trucks will be entering and exiting the corner.

The proposal has been deferred to a future meeting.
‘She Shed, Man Cave’ showcase approved in South Bibb
A proposal for a south Bibb County sales lot to display built-to-order accessory buildings at 6423 Houston Road drew a question from Commissioner Bryan Scott.

“What type of structures?” Scott asked Blake Horne, who spoke for  StorMor applicant Will Gardner, who couldn’t make Monday’s meeting.

“She shed or man cave,” Horne said to describe the up to 25 storage buildings that will be set at least 10 feet apart on about two acres near Liberty Church Road.

Commissioner Gary Bechtel asked whether the owner planned to pave the parking lot.

“My concern is about potential flooding,” Bechtel said.

Horne indicated that most of the customers contact the business through social media, so there were no plans to pave a parking lot.

Commissioners approved the conditional use of the property.
In other business:

101 Whistler Lane – Variance granted to allow a four-foot-tall fence along Providence Boulevard and Whistler Lane.
7516 NE Industrial Boulevard – Rooms To Go permitted to use a parking lot for furniture delivery trucks and employee vehicles on an unpaved 2.42-acre lot.
567 Arlington Place – Exterior modifications approved to restore the front porch to its original open configuration.
2370 Vineville Ave. – Commission approves new windows as part of exterior modifications for Vineville Christian Towers.
2473 McDonald Ave. – Barry Stephenson’s exterior modifications replacing windows and a door are approved for a 1930 bungalow.
2730 Bloomfield Village – Conditional use to allow a church in a shopping center development. Reprentatives for the applicant, Seal Inc., failed to show for the meeting. Project was automatically deferred.
5761 Fulton Mill Road – John Kellum received permission to put a manufactured home with a metal roof in the middle of a 2.77-acre lot and 137 feet from the road.