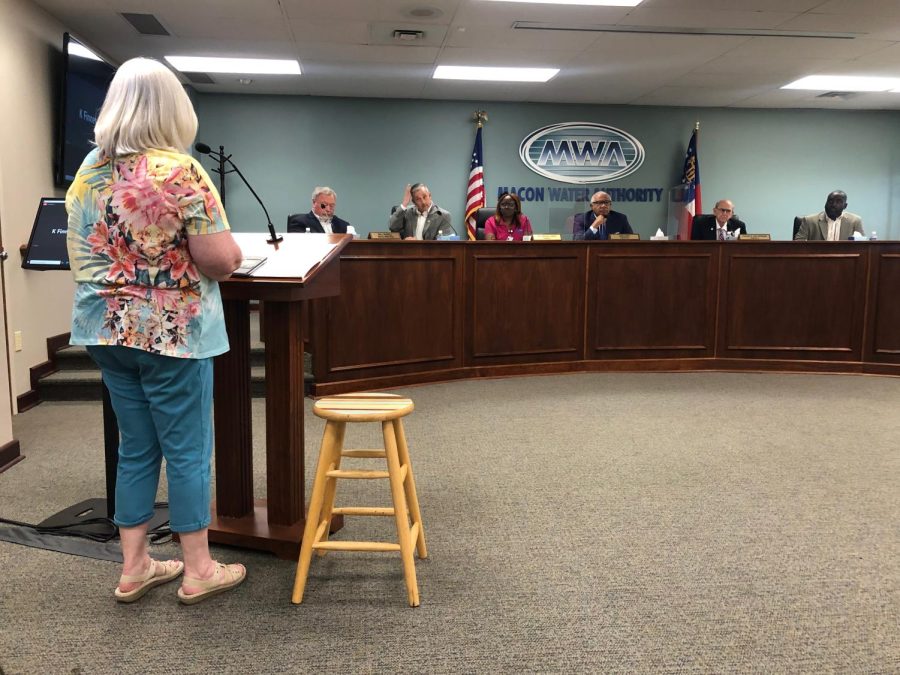 Fresh from the latest flooding of their property, frustrated residents of south Bibb County aired grievances for nearly an hour at the Macon Water Authority meeting Thursday night.

Many of the neighbors have been calling for help for more than a decade, long before the authority assumed responsibility for stormwater management in 2021.

“I live in the Bermuda Triangle for our area. All the water in our neighborhood comes to me,” Mary Ann Chevalley, of Frances Drive, told the authority. “This problem has become horrendous. We have terrible flooding anytime we have a heavy rain such as we did yesterday.”

This week’s deluge of nearly 5.5 inches of rain sent water out of drainage ditches and within inches of multiple homes near Nowell Estates and off Houston and Liberty Church roads.

In addition to soggy lawns and drenched gardens, Chevalley puts up with the continual presence of mosquitos from the standing water in a ditch that never drains. Other neighbors complained the insects keep them confined to their own homes in the warm months.

“We’ve been complaining to the Macon Water Authority and City of Macon for years,” Clance told the authority. “I want to know the plan and want to know it today. … We are sick and tired of this crap.”

Clance’s neighbor, Mitch Sapp, said flooding has worsened over the past 10 years with increased development in the community.

“We’re in desperate need. We are in dire need,” Sapp said.

Billie Ann Brooks, who lives on Bevin Drive off Liberty Church Road, said there was never this kind of flooding in the neighborhood when she was growing up.

“We got four feet of water in our house last night. The water has changed somehow. It was running across Bevin,” Brooks told the authority.
Stormwater study underway
After the complaints, MWA Executive Director Joey Leverette called up to the microphone engineering consultant Daniel Cheek, who has spent recent months researching FEMA regulations and flood guidelines in that nearly 3 square-mile-region. He warned residents that it could be up to a year before any physical work begins.

“In areas where FEMA has established a base point elevation, we’re not allowed to do improvements that significantly affect up or downstream residents,” Cheek explained. “We can’t go fix problem ‘A’ and it get 10 times worse downstream. There’s liability tied to that for others, so we don’t want to create additional damage.”

Cheek said they have identified some key problem areas to start on but need to do further study on how any changes will affect other nearby areas.  They will be reviewing those prospective plans and models in the next month before beginning to develop design concepts to present to the Macon Water Authority.

Plus, if any property needs to be condemned for a retention pond, that will likely lengthen the process, Cheek said.

Once a plan is in place and sufficient funding identified, the FEMA review of the proposal could take another six months, Cheek estimated.

That wasn’t welcome news to the residents who have been fighting flooding for years.

“I would just stress, as you’ve just heard tonight, that this is a 30- to 50-year problem that has been compounding and it’s not going to be fixed overnight, but we are on the right track to get started and getting it fixed,” Cheek said.

Macon-Bibb County Commissioner Bill Howell, who represents the county on the authority and lives in that flood-prone district, noticed a major change in this week’s flooding.

When Macon received more than 6 inches of rain in a few days in October, MWA received 121 flooding calls compared to 43 this week.

Howell mentioned that last fall a portion of Glen Haven Memorial Gardens flooded but MWA crews have since cleared out the ditch.

“The graves were not underwater this morning,” Howell said. “I know it’s slow. I know it’s aggravating when it’s your back yard. I know exactly. … We are working on it. We are at the mercy of FEMA on a lot of this.”

Stormwater manager Marvin Land was on vacation but kept taking calls through the night, Wanna said.

Authority board member Dwight Jones told the south Bibb residents he is aware their prior complaints to the county have gone unheeded, but that the authority now is listening and acting.

“We intend to do something about all of it over the whole county as quickly as possible,” Jones said.

Despite Thursday’s flood of southside complaints, Jones found cause to celebrate improvements to downtown drainage issues that were obvious by the reduction of calls that come in the other night.

Clark recently was sworn-in to temporarily fill the District 2 seat vacated by Desmond Brown, who is running for MWA chairman with Gary Bechtel and Tom Ellington.

At the start of Thursday’s meeting, Chairman Hart welcomed Clark back to the board.

“We were blessed to have Sheddrick sit in at an earlier time on an interim basis where he sat in for somebody and he did an excellent job,” Hart said. “He did so well we asked him back ad he graciously accepted.”

Clark, who does not live in the district, previously was tapped to fill the unexpired term of the late Javors Lucas, who passed away in 2019.

At the time, Board of Elections board member Henry Ficklin objected to Clark’s appointment. Ficklin said Clark was not qualified to serve as an interim authority member since he did not live in District 2, but the authority’s position was they did not want to establish an incumbent who could run with that advantage in the special election.

“I would like the residents of District 2 to know that I am an advocate for the voiceless,” Clark said in a news release announcing his appointment. “I always want to do what is in the best interest of those I serve, and I want to make sure that District 2 residents are happy with how I carry out the responsibilities given to me.”

A new District 2 board member will be elected Nov. 8 to fill Brown’s unexpired term.