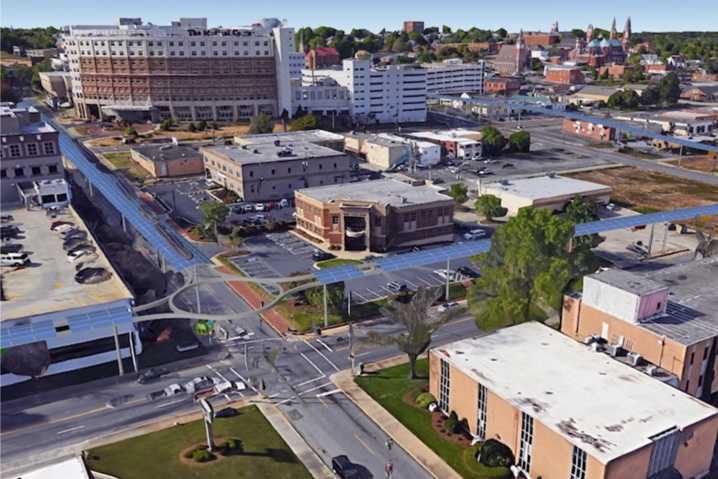 When Macon-Bibb County Mayor Lester Miller announced a new amphitheater and development plans for the Macon Mall, who could have envisioned the possibility of an aerial transportation network to the property?

Georgia Mobility Company and JPODS LLC hope to build a rapid transit network of pods or gondolas to connect downtown to the Macon Mall, similar to amusement park rides like the Agri-Lift at the Georgia National Fairgrounds but with enclosed cars.

It might sound far-fetched to some, but those companies signed a Memorandum of Understanding, or MOU, with Mayor Miller in mid-January. The non-binding agreement confirms the county is interested in pursuing the possibility and will “reasonably cooperate” with making available rights-of-way and air rights.

“Well, it’s certainly something that I think we can’t rule out,” Miller told the Center for Collaborative Journalism in a recent Ask Mayor Miller segment. “We don’t want to get people excited about the Jetsons and all of a sudden going from one location to the other, but there’s some technology that exists in the world, and they’ve had it at a couple of places, and I think Macon would be certainly a great market for that.”

The system would not cost Macon-Bibb County any money and could be a great attraction for the community, Miller said.

“It’s kind of like a rail but it’s in the air. If you go to Disney World, you’ll see that… kind of concept,” Miller said.

Solar panels on top of the rail network power the novel transportation system that is in operation on at least one cruise ship, the mayor said.

The MOU states: “GA Mobility’s network will be 100 percent privately funded and owned, solar-powered, high capacity and operating 24 hours a day and 7 days a week.”

Auta Lopes, president and CEO of Georgia Mobility Solutions, said the company is getting engineering studies done. She said a news release is pending, although local leaders were not aware of any scheduled press conferences or announcements.

“We’ve already proposed several sites where we can adjoin JPods,” Lopes said last week. “We’re very excited and praying we can bring it to Macon. It’s a really exciting project and it’s going to change the way we travel.”

The company made a similar proposal to the McDonough City Council last year. In 2013, Fayetteville rejected the idea of building the network on public property.

Lopes said JPods were operating in another location, but were taken down due to vandalism.

Macon Area Transportation System planners briefly discussed the project earlier this year and pondered whether federal funds could be available for the environmentally-friendly transit line.

“It’s green. It’s clean and gets you from Point A to Point B,” Lopes said.

She equates it to an “Uber in the air.” The pod will meet riders at a specified location where they will board a gondola-like car that will take them to their destination.

“It’s a personal pod, by the way. Only your friends and your personal guests will ride with you,” Lopes said. “It’s a really unique and interesting project.”
Presidential Parkway plans
The aerial JPods system is just one project the county is considering as it focuses on redevelopment along the Eisenhower Parkway corridor.

The mayor said he has recently discussed development options with the new owner of shopping centers along Presidential Parkway.

“We’ve got some very good, aggressive, out-of-the-box ideas for that community there. Some retail, some other,” Miller said in the February edition of Ask Mayor Miller.

Although Miller would not talk specifics this early in negotiations, he said the new owners have managed shopping centers all across the United States.

“I think they’re going to have that credibility and that reputation that they can bring some retail to that area that’s going to help the entire area,” Miller said.

The mayor’s plans are progressing for redevelopment at the mall and construction of the amphitheater.

A county delegation recently traveled to Huntsville, Ala., to tour that community’s new amphitheater on the site of an old shopping mall. After studying that new facility, Miller expects to break ground this month on the county’s new concert and entertainment venue.

They gleaned a lot from Huntsville’s experience in building its 8,000 capacity Orion Amphitheater, which is expected to open in May.

“The back of the house is important,” Miller said. “We all see the nice things out front, but really to attract that entertainer to that venue, you have to meet their needs in the back of the house – a certain size of the green room, the fact that they may need a kitchen or patio there. They like to have commercial washers and dryers to wash their clothes there or other materials that you don’t really think about when you think about booking a band.”

The mayor said he was thinking about the amphitheatre needs and design when he made his recent appointment of retired Theatre Macon Artistic Director Jim Crisp to the Urban Development Authority. Miller noted Crisp’s experience will be invaluable as they plan the facility. This week, they are expected to choose a contractor for the amphitheater project.

The Urban Development Authority, or UDA, will own Macon-Bibb County’s portion of Macon Mall that is being donated to the county by Hull Properties Group. The authority also is proceeding with plans to turn the old Belk department store into an indoor pickleball facility. The mayor and other community leaders expect the nearly three dozen indoor courts to be a major draw for regional tournaments.

Last month, the UDA hired a design specialist to layout the courts in one of the mall’s old anchor stores that fronts Mercer University Drive.

“We’ll be able to host large tournaments as a tourism project. This is a year-round opportunity that is part of the overall vision to revitalize Macon Mall and surrounding area,” Macon-Bibb County UDA Executive Director Alex Morrison said at last month’s meeting.

The design will dictate the cost of the pickleball project, which has not yet been publicly released. With 800 to 1,000 people expected for tournaments, the hospitality industry could reap future dividends with anticipated boosts for lodging, food and entertainment businesses.


Departments on the move
Miller’s plans also are progressing for certain county offices to move from rented spaces around town to the mall. The UDA will collect rents  that will be used to repay the $40 million in bonds expected for the whole redevelopment and amphitheater project.

Macon Transit Authority President and CEO Craig Ross informed his board last month that county departments such as the Macon-Bibb County Planning & Zoning Commission, Business Development Services, IT and Code Enforcement will be leaving Terminal Station later this year.

Miller said not all of them would be joining the Macon-Bibb County Board of Elections at the mall. As soon as City Hall renovations are complete, Code Enforcement will move into the first floor of that building from its offices at the old train station.

The Board of Elections is not expected to move to the mall until after this year’s election cycle, which includes the governor’s race and mid-term Congressional elections and a U.S. Senate race.

This summer, the Macon-Bibb County Tax Assessors Office is expected to leave its location on Second Street to the old IBM building at 688 Walnut St. at the corner of First Street.

On Tuesday, the county commission is expected to give final approval of a contract for the Summit Group to continue to manage the building and existing tenants under active leases who wish to remain.

– Civic Journalism Senior Fellow Liz Fabian covers Macon-Bibb County government entities and can be reached at [email protected] or 478-301-2976. Send questions for the next Ask Mayor Miller to [email protected]