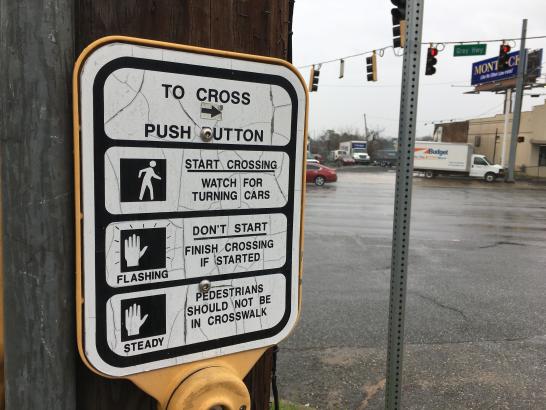 Some Macon residents choose to risk the walk across the busy road instead of heading in the oposite direction just to reach the sidewalk. “I don’t have much of a problem but I can see how someone who walks a little slower might,” said Mary Smith, who had just crossed the road on her way to the bus stop.

An initiative to identity areas that are dangerous for pedestrians will be the focus of the Macon-Bibb County Pedestrian Safety Review Board as it begins to recruit community members to take part in “walking safety audits.”

The upcoming audits have not been scheduled yet but will help identify improvements needed for safe foot traffic.

“We really want to get people involved,” board member Charise Stephens said in the monthly meeting Tuesday. “We don’t need any more deaths before the end of the year.”

No one in attendance could say with certainty how many pedestrian deaths had occurred so far in 2021. Bibb County Leon Jones told the Macon-Newsroom there have been a dozen such fatalities so far this year, on track with previous years.

Three pedestrians have been killed since the October meeting including two in south Macon.

Tawanda Faye Willis died on Houston Road after being hit by a car about 8:30 p.m. on Nov. 9. The 47-year-old was  walking to the Jumbo Gas Station from Magnolia Court Motel, The Telegraph reported. Hours earlier, about 1:15 a.m., 35-year-old William Craig Pope died on the east side of town after being hit by a vehicle on Jeffersonville Road.

Board Chairman Gregory Brown said the board will work with neighborhood planning groups to identify areas to prioritize for the walking safety audits.

“We’re going to try to target as many neighborhoods as possible,” Brown said. “We don’t know exactly where we will go, but it will be in areas where, of course, there is a lack of sidewalk infrastructure.”

Brown said he expects a mix of county commissioners, neighborhood residents and members of the review board will take part in the walking audits, which are set to start before the end of the year. Attendees will be expected to document observations of what pedestrian infrastructure is needed in those areas.

The board voted unanimously to approve $50 gift certificates to offer as an incentive for people to participate in the walking safety audits. The money comes from a grant to the board from the Georgia Department of Health.

The board also is working to compile information about the number of pedestrian fatalities year after year. Part of that data collection will include creating a map of where the deaths occur.

“If there’re fatalities occurring in one area as opposed to another, that will let us know that we probably need to focus some pedestrian safety activities where most of the fatalities are occurring,” Brown said.

In other news, the $1.2 trillion bipartisan infrastructure bill signed by President Joe Biden on Monday means Bibb County will be able to start on “much needed repairs” to infrastructure here, board member and County Commissioner Elaine Lucas said.

“I think for those communities that have not been treated right over the years, I think it’s going to be resources that will allow cities and counties to make up for that,” Lucas said. “It will create an atmosphere of greater safety for everybody.”