1 in 5 Georgians quit jobs to be caregivers during the COVID-19 pandemic. Here’s why 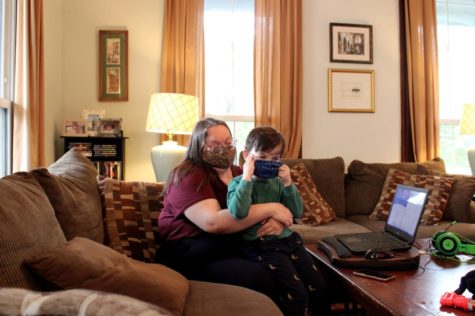 Lane Hinson hugs her son, Lennox, in their home in Macon, Ga.

A recent survey shows the COVID-19 pandemic has been especially hard on caregivers. GPB’s Ellen Eldridge reports this impacts at least one in five adults in Georgia.

From there, the pandemic worsened an existing gap between those who need care and those who provide it, said Dr. Jennifer Olsen, the CEO of the Rosalynn Carter Institute for Caregivers.

“We know that COVID resulted in people who had serious illness and needed to come home from a hospital and have a family member care for them.” Olsen said. “We know that people who were maybe planning to move into a nursing home or assisted living facility maybe chose not to — or their family chose not to.”
Coronavirus comes to Georgia
Georgians saw its first known infections of SARS-CoV-2, the virus that causes COVID-19, after a pair of funerals held in Southwest Georgia in late February 2020.

A man from Atlanta died a few days after the services.

Those were the days before folks knew anything about “social distancing,” and no one fully understood how the virus spread.

The surge of sickness kept Dr. LaMont Smith from retirement as he worked 80 hours a week for Phoebe Putney Memorial Hospital in Albany. By the end of March, the five-county Albany metro area had logged 628 infections.

MORE: How Albany Emerged As A Global COVID-19 Hotspot
Toward a better understanding
To better understand caregivers’ experiences over the last two years, the Rosalynn Carter Institute for Caregivers conducted a national survey, which was released Sept. 28.

The report, Working While Caring: A National Survey of Caregiver Stress in the US Workforce, found that, over the course of care, 44% of family caregivers employed full time said they had to go part time.

A fifth of working caregivers in Georgia said they had to quit their jobs entirely.

The Rosalynn Carter Institute for Caregivers, a nonprofit organization established in 1987, seeks to understand how caregivers are affected both by the stresses and challenges of paid work, as well as how employers and business owners can be more supportive to family caregivers.

The former first lady once said she believes “only four types of people inhabit the world: those who have been caregivers, who are caregivers, who will be caregivers, and who will need caregivers.” RCI was established at Georgia Southwestern State University in her honor.

“Like all of us, caregivers are feeling the many challenges that COVID brought,” the CEO of RCI said. “But I would say, unlike many other populations, we aren’t really talking enough about how caregivers’ physical and mental health is impacted.”

Olsen said 80% of caregivers experienced increased burden and stress due to the pandemic. Their No. 1 challenge was emotional distress from trying to balance caregiver and employee roles, without much support from employers.

The survey shows younger caregivers of color and those with lower levels of education and income are less likely to have flexibility with employers.

“Specifically, only about 40% of employers are offering mental health coverage to their employees,” Olsen said. “And so I think there’s a disconnect when we say we know the caregivers are struggling — employers are aware that this is a population — but the action and making change, that’s what needs to happen now.”
Deciding on the next steps
Before the pandemic, the Centers for Disease Control and Prevention predicted the number of people over age 65 would double by 2030, and the Alzheimer’s Association projected the disease would increase by nearly 27% in Georgia by 2025.

Meanwhile, the number of people trained to care for those with cognitive and physical degeneration is not keeping up.

There are roughly 7,300 geriatricians practicing in the United States and the American Geriatrics Society expects 30,000 geriatricians will be needed by 2030. Again, these are numbers estimated before the pandemic hit.

READ: Medical College Of Georgia Program Seeks To Inspire Doctors For The Elderly As Population Ages

That’s the next phase of RCI’s work, Olsen said.

“We’re looking at how to engage employers both at the corporate level, the HR departments or benefits level, as well as some of that manager supervision (and) engagement around caregiver supports,” she said.

Public safety and health care workers cannot work from home. Now more than ever, skeleton staffs are likely to be overwhelmed and unable to take time off.

“If you’re a firefighter, you have to be on at your job at the times to which you’re appointed; there’s not variability there,” Olsen said. “And so how can we be more supportive of those individuals?”

“If caregivers do their job well — family caregivers — people don’t end up in institutional care,” Olsen said. “That’s a cost savings for the nation and for employers.”

The way to start, she said, is by recognizing the economic impact of caregivers leaving the workforce, and adapting policies to create a more supportive environment.

Listen to the story here.