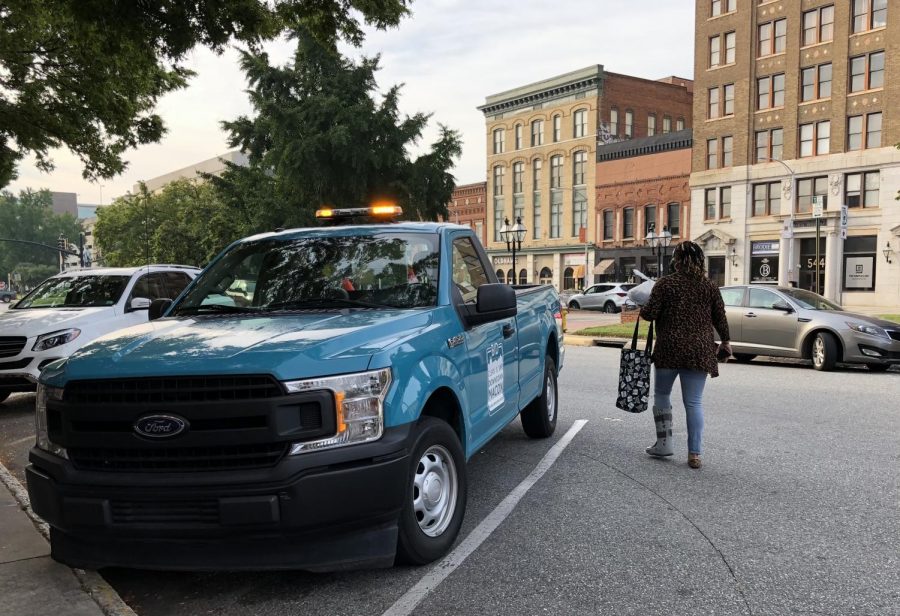 Downtown Macon ambassadors, who cruise around in this blue pickup, help keep streets clean and safe.

When it comes to business owners investing in downtown Macon, the full effect of the $1.4 million spent so far might not be easily recognized.

That’s because the bulk of extra taxes paid in the Business Improvement District, (BID), has gone toward keeping downtown safe and clean by hauling away nearly 7,200 bags of trash and 930 handbills.

Since 2019, a team of ambassadors working out of the ground floor of the Fickling Building does everything from answering visitors’ questions and giving directions to removing graffiti.

“This group does all the little things we don’t think about… but if they went unattended, they would be the things we’d hear about,” NewTown’s Chief of Staff Erin Keller said as she introduced the team of ambassadors at the BID’s annual meeting.

“The one that got me is the 355 scoops of waste,” Watkins told the audience. “I just thought the dog owners were getting better. … Thank you, NewTown for figuring this out.”

In the summer of 2017, NewTown harnessed a Downtown Challenge grant from the Community Foundation of Central Georgia to lead a campaign to pass the Downtown Macon BID.

Property owners agreed to pay an extra five mils in taxes in exchange for an increase in public services. Initial estimates expected about $300,000 in collections per year.

The ambassadors have spent more than a thousand hours on beautification projects such as pressure washing and painting.

A quarter of the funding went to landscaping and capital improvements.

The BID partnered with the county and the Peyton Anderson Foundation to renovate Poplar Yards, the median strip down Poplar Street.

They also worked with Macon-Bibb Parks and Beautification to spruce up the park along the Third Street median from Cherry to Poplar. Crews removed prickly hedges and added rose bushes, shrubs and larger stone benches. NewTown also installed stone cornhole boards in the park’s center square.

This spring, the BID installed light fixtures in downtown alleys which have become a popular spot for photographs.

The governing board, which decides how to spend the funds, consists of five elected volunteers and two appointed representatives of Macon-Bibb County and NewTown Macon.

The BID covers the central business district between New and Fifth streets and from Riverside Drive to Plum Street.

The program expires in 2023 when property owners will vote to extend or end the BID.

“It’s getting hard to imagine downtown Macon and Bibb County without the ambassadors,” Watkins said.

“It’s a united front and this just speaks volumes,” said Bronson, who wants Macon to be the top city in the state.

In the first meeting since the pandemic, Keller stressed the transformation the extra tax dollars have made.

“A blindman could see the difference in downtown Macon from when we started,” she said. “We’re moving in the right direction and the BID has been a shining example of that.”