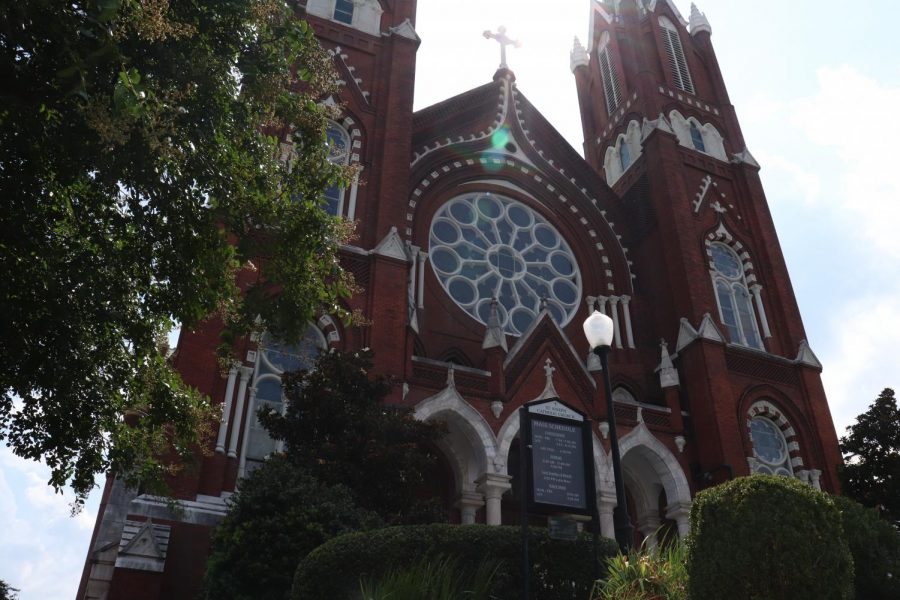 St. Joseph's Catholic Church is one of the many impressive examples of Macon architecture Barfield lists.

As Jim Barfield sits in his historic home on College Street talking about Macon’s architecture, it’s easy to glance through the window of the sun-washed living room and see the types of homes he mentions. The houses along this street depict a different time, offering a view of an older Macon. The inside of Barfield’s place has the same effect, each room is a myriad of historical books, pictures and furniture.

This history is one of Macon’s greatest values, according to Barfield.  There are no archives to sift through because the buildings and homes of centuries past are still standing across the city. That architecture is one of the reasons Macon’s downtown has seen a resurgence within the past two decades after bottoming out by the 1990s. The connection might require a bit of digging, but Barfield is just the man for the job.

Macon’s downtown was at one point a “ghost town,” according to Barfield. To explain that emptiness and how downtown has recovered in the last two decades, Barfield starts in the 1970s.

“Macon has always had its ups and downs and periods of growth and decline,” Barfield said. “Really it was after the Macon Mall opened in the 1970s and other shopping centers that downtown got sort of sad.”

Barfield hesitates before using the word sad, because he is immersed in downtown’s history and beauty. He has written two books on Macon’s architecture and is working on a third. But there are few other words in Barfield’s mind for the state of downtown at the time.

Barfield said downtown has been a hub for business since Macon’s infancy in the 1820s. It reached its peak during World War II thanks to the nearby Camp Wheeler, but the area’s commerce had faltered by the 70s. That decline continued through to the 1990s, and by then even a Macon architect was aware of downtown’s emptiness.

“I mean, the Rookery was the only place in town that was open,” said Wimberly Treadwell, a landscape architect who has worked in Macon for her entire life. “It is such a different place (now).”

The work that Barfield admires and studies is the work that Treadwell builds around when she works in Macon. Some of her projects include the Coleman Hill Slides, the plaza between the Tubman and Georgia Sports Hall of Fame and High Street Park. Her passion for the city is rivaled by few, but even she lamented the state of downtown Macon by the 1990s.

“My sister and Rose Lane Leavell (another Macon native) were the only two upscale retailers left downtown,” Treadwell said. “It has been a true transformation.”

Barfield and Treadwell both said there were many unsuccessful rehabilitation attempts between the Mall-induced decline and the recent growth.

In the 1970s, Cherry Street was lined with railroad ties to hold planters and provide walking space, but they decayed and became filled with bugs. Barfield specifically credits two past Macon mayors, Buck Melton and George Israel, with trying to redevelop downtown by keeping older buildings in good shape. Old fluorescent lights were replaced with more historically fitting lights, courtesy of Israel.

The city also attempted to renovate the 400 block of Poplar Street starting in 1987, but delays and lack of tenant interest doomed the projects. Outlet stores almost came to Poplar in 1994, but again the plans fell through.

The failed rehab was the white flag for the area. Downtown Macon was no longer a center of commerce as it had been from the 1940s to the 1960s. The historic buildings of the area were left to linger while the malls and suburbs flourished.

The area was kept alive, though, thanks to the architecture being maintained. Buildings, whether they had tenants or not, were kept in shape. The efforts of Israel and Melton kept properties from floundering. The Facade Easement program let business owners renovate exteriors with federal government money.

Despite the fact that it seemed dead, downtown Macon was just waiting for the right moment. That moment arrived in the late 2000s and 2010s in the form of a new city trend.

Adams lists and sells historic lofts and houses in Macon and has a passion for history. He estimated that his own loft has nearly doubled in value since he purchased it around five years ago.

“I’ve never lived anywhere where the value did that,” Adams said. “I’m a listing agent for some lofts, and they’re all sold. The most expensive one is $520,000, $200 a square foot. They’re selling for more than houses.”

The shift towards loft living happened swiftly, according to Adams, much like the shift away from downtown in the 1970s. He said that people seek smaller spaces that are easier to manage, taller ceilings, city views and, crucially, a more historic or industrial feel. This is true of the historic buildings in Macon as well.

“The way a building looks and is built has an impact on the way the people who use it feel and behave,” Barfield said. “ You may not notice the building that much, but it gives you a feeling of something.”

This is where downtown Macon gained an edge. There were already old lofts in the area and historic buildings around them that gave people the “feel” they were looking for.

Barfield can rattle off buildings like the old City Hall, St. Joseph’s Catholic Church and the Al Sihah Masonic Temple on Poplar Street that give downtown a historic beauty. Meanwhile, Adams lists the different historic lofts scattered across downtown that have exploded in popularity. That blend is what revitalized downtown Macon.

“People from Charleston come down and say, ‘I had no idea Macon had this variety of architecture,’” Barfield said. “Macon is unlike other cities in that it has architecture from a variety of different periods and styles.”

Today, restoration is rampant and successful. In the 2000s, Poplar Street was finally remade into the walkable green space it is today. Groups like Historic Macon, NewTown Macon and Mercer University have renovated buildings and houses in the surrounding area throughout the last two decades. Mercer recently built the only ground-up lofts downtown: the Capricorn Lofts.

“We’ve got all these people living downtown, but we still don’t have everything we need, like a grocery store,” Adams said. “We have very little as far as food besides restaurants.”

“The idea of downtown Macon coming back as a retail center has not really happened,” Barfield said. “There are some shops, but it’s mostly entertainment, restaurants and bars.”

These shortcomings show that downtown Macon still has room to grow and goals to meet, but that simply fits the trend Barfield, Treadwell and Adams describe. After all, Macon has had its ups and downs.