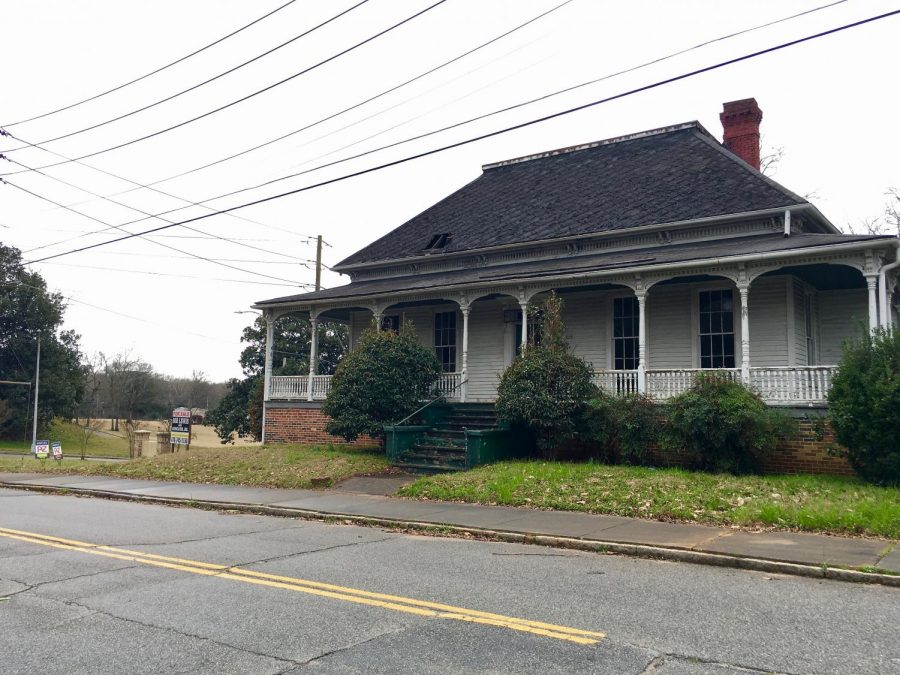 The wrecking ball twice threatened the circa 1865 DeWitt McCrary house in recent years. The Urban Development Authority bought it and is working with Historic Macon to restore it.

Time was almost up for one of east Macon’s oldest homesteads that fell prey to vandals.

The clock has been ticking for the endangered DeWitt McCrary home off Main Street since a 2017 proposal to tear it down and build a convenience store.

That scare led to the stately Victorian home making the Historic Macon Fading Five list in 2019. Preservationists have been trying to negotiate a bargain sale ever since.

Friday morning, the Urban Development Authority purchased the house and its companion cottage for $320,000. It was listed for $350,000.

The Macon-Bibb Planning & Zoning Commission first saved the house from the wrecking ball four years ago, but developers came back this spring with a new proposal for a shopping center.

This time, the Urban Development Authority joined forces with Historic Macon to intervene and buy the properties at 320 and 334 Hydrolia Street and 342 Main Street, which fronts Coliseum Drive.

“We just feel like this neighborhood is in crisis,” UDA chair Kay Gerhardt said after the authority signed off on the purchase.

It’s not just any neighborhood, but what is considered Macon’s first.

Across from  the “For Sale” and P&Z signs now in the overgrown yard, a brick-columned entryway in the Main Street median designates the “Fort Hawkins Neighborhood” as the birthplace of Macon.

In 1806, nearly two decades before Macon and Bibb county were founded, President Thomas Jefferson established Fort Hawkins a couple of blocks away. The frontier fort overlooked the Indian Mounds and sacred “Old Fields” of the Native Americans.
Age-old sage of east Macon
DeWitt McCrary, the man known as “east Macon’s first citizen,” is credited with establishing a successful drug store, one of the first businesses outside downtown.

The pharmacist served 12 terms as a Macon city alderman and three terms as a Bibb County Commissioner. He advocated for and celebrated annexing the neighborhood into the city limits in 1910. He was the most notable resident of the circa 1865 home.

He was referred to as the “age-old sage of east Macon,”  in a 1950 editorial in The Telegraph months before his death at age 91.

On the occasion of this 80th birthday the newspaper praised his generosity and public service: “It was often said of this benevolent with father that no sick East Macon child ever wanted for medicine, if the druggist knew what the child needed. He is said to have never refused a person, black or white, who had a prescription but no money.”

In June, the vacant house which suffered a fire at the hands of vagrants earlier this year, also wound up in the crosshairs of Mayor Lester Miller’s war on blight.

A warning letter to the owner from the county said the condition of the property could lead to its demolition. The note was stapled near the front door where broken glass from busted windows littered the ornate wrap-around porch.
How the house was saved
“The plans for this neighborhood are grand and they are to return it to what it once was,” UDA executive director Alex Morrison told P&Z’s Design Review Board in April. “And it’s hard to return something to what it was when you take the oldest living and surviving property and home from it and turn it into something foreign to it.”

The “foreign” thing Morrison referred to was a strip shopping center planned between UDA’s pie-slice of land it owns near Clinton Street along Coliseum Drive and a new convenience store going up next to the fire station.

During that hearing in the spring, realtor Bob Lewis noted the irony of that store being built now after he failed to get approval for the 2017 plan by the same developer, former P&Z commissioner Ashok Patel.

Lewis told the Design Review Board the only time in his 50-year career that he had ever been turned down by Planning & Zoning was when he petitioned to have a convenience store built on land where the old house stands.

For nearly four years, Lewis tried to sell the DeWitt McCrary house which belonged to Diana Blair, who has been selling off her Macon properties.

He negotiated with Historic Macon about saving the house or moving it, but no deal was reached.

UDA and Historic Macon both opposed tearing down the houses during the April hearing.

“This house has a name. It’s beloved and this community owes it to itself to preserve it,” Morrison testified.

He told the board it’s time to address neighborhood concerns about their “history consistently being demolished… in the way of progress that doesn’t feel like progress to the neighborhood.”

Historic Macon executive director Ethiel Garlington also made a passionate plea to save the house, as did Jan Beeland, who serves on the Urban Development Authority.

“Fort Hill is the first designated neighborhood,” Beeland said. “The two houses are an integral part of the neighborhood due to their historical significance.”

The DeWitt McCrary house was added to the National Register of Historic Places in 1974.

Patel explained that he attempted to spare the main house in his shopping center design.

“I did try to build a smaller plaza there but financially it doesn’t make any sense,” Patel told the board.

Garlington said Historic Macon was willing to allow the smaller house to be demolished if they could work with the developer to save the DeWitt McCrary home. A variance would have been necessary to reduce the required number of parking spaces.

Design Review Board chairman Chris Clark voted against both demolitions. He and board member David Thompson also raised concerns about the cramped nature of the shopping center design.

“It would need a buffer between new construction and the neighborhood,” Thompson noted.

“There are going to be all parts and pieces we’re not seeing – dumpsters, AC units on the ground, all manner of wiring and service. Not the most attractive face to put toward the neighborhood. …Without a buffer the architecture is inappropriate as well.”

Thompson motioned for the design to be rejected as submitted and the board agreed.

The matter still could have gone to P&Z for consideration but Patel deferred the item from the next meeting and did not resubmit, which cleared the way for UDA to negotiate a sale with Lewis and Blair.
What happens next?
Once they signed the contract, Historic Macon boarded up the broken windows and will soon begin restoration now that the sale has closed.

“We’re going to work with them to stabilize the property and then hopefully sell the houses separately from the commercial lot that fronts Coliseum,” Morrison said.

Across Main Street, UDA is also using a $50,000 Downtown Challenge grant from the Community Foundation to spruce up the park that borders Clinton Street and fronts the fledgling East Macon Mill Hill Arts Village.

Restoring these homes will be another piece of the restoration puzzle that will preserve some of the neighborhood’s history while creating a new entrance to the Ocmulgee Mounds National Historical Park, home of Macon’s earliest residents.

Despite the vagrant-set fire on a cold night in January, the DeWitt McCrary house can and will be saved.

Handcrafted woodwork on door frames, interesting butler’s pantries between rooms, built-in solid oak shelves and a hidden pocket stairwell that leads to upper sleeping quarters are part of its charm, he said.

“The property actually sits up on a bluff,” Morrison said. “It actually had a panoramic view of the river when it was built. Such a prestige property.”