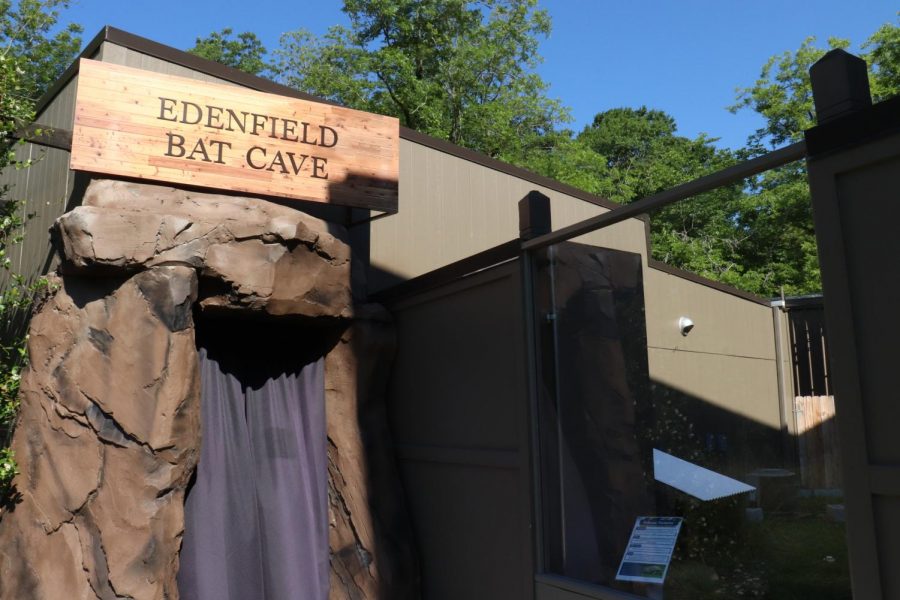 The black curtains mark the entrance to the Edenfield Bat Cave at the Museum of Arts and Science in Macon.

It’s tempting to sing the Batman theme song as you enter the new Edenfield Bat Cave at the Macon Museum of Arts and Sciences, but it quickly becomes silent as you go inside.

Protected by black curtains, the room is the dark and quiet home of four African straw-colored fruit bats. These bats are part of an exhibit opened by the museum in February and can be seen hanging from the ceiling of a large, realistic cave near the museum’s pavilion area.

Sitting inside that quiet cave, animal curator Sharron Cornacchione said the exhibit is unique compared to other museums and even entire zoos.

“A lot of zoos don’t have bat exhibits, there are only a select few in the U.S that do,” Cornacchione said. “So the fact that here in Central Georgia at the museum we have a bat cave is pretty incredible. Our campus is really expanding.”

The four bats now living in Macon were moved from the Jacksonville Zoo in Florida and each have a wingspan of two and a half feet, much different from local bats of Georgia.

“The reason we didn’t house native bats is because they’re very small, but also because they’re insect eaters,” Cornacchione said. “They would be a lot more difficult to feed, for these bats here we can literally put in what we give our lemurs and tamarinds.”

The African bats eat many of the same fruits the museum’s tamarins do, according to Cornacchione. Despite the differences between Georgia bats and the African bats housed at the museum, the animal team still uses their exhibit to teach visitors about the benefits of bats here in central Georgia.

MAS’s raptor manager Pete Griffin smiled and laughed when asked how important the exhibit and the bats are in Central Georgia.

“You got 15 hours?” he said. “People need to learn, there are the birds of prey and bats you’ll see in your backyard. They’ll eat snakes, mice and chickens. But you can’t touch them, because they’re protective, but that’s part of the energy transfer system.”

Griffin and Cornacchione said the bats can help locals learn about wildlife around them even if they are not the same species.

“They’re not just coming here and standing here looking at an exhibit, asking themselves questions,” Cornacchione said. “We answer the questions, so they have the opportunity to come here and learn as much as they want to.”

The four bats are named Max, Calvin, Tommy and Parsley. They range from 14 to 19 years old and needed a custom-designed bat cave to live in, which is one of the reasons the process of building and opening the exhibit took three years for the museum.

The answer, as it turns out, was an architect known as “The Caveman of Georgia” that specializes in artificial boulder construction.

Cornacchione and the museum enlisted the architect to construct the exhibit after previous designers dropped the project while they engaged in the two-year process of actually obtaining bats from the zoo in Jacksonville.

“It’s a beautiful cave,” Cornacchione said. “It stays 80 degrees all year round, 80 degrees is the optimum temperature that they love. There’s a humidifier because the membrane on the bat’s wing has to stay moist so it will not crack. The UVA and UVB (ultraviolet) bulbs give them Vitamin D in place of sunshine.”

In short, the process led to a curated exhibit that houses the bats in a comfortable environment. That three-year journey was just the beginning, though. The museum is adding five more bats from Jacksonville later in the summer, and an entire birds of prey exhibit will be opened throughout the pavilion in the future.

“In the five aviaries there will be five species of non-releasable birds of prey,” Griffin said. “There will be owls to do outreaches here, and I’m hoping to have a red-tailed hawk to do a flight to add to that program.”

The exhibit is an ongoing work in progress, according to Griffin, but the bats will remain a fixture of the pavilion area. The Edenfield Bat Cave is open during the museum’s hours Tuesday-Saturday and features bat feedings at 4 p.m.