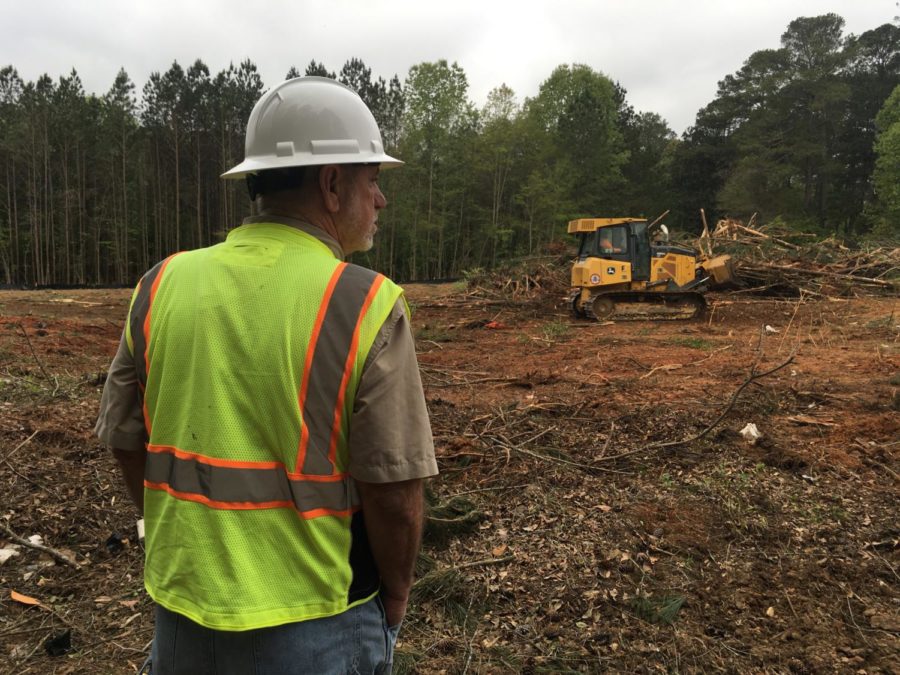 Since last summer, Gwendolyn Hurst has been anxious to learn more about new senior citizen housing planned for north Macon.

The 69-year-old wants to file an application as soon as she can. She hopes to secure one of the 72 units that will be built on nearly three acres on Northside Drive between Tom Hill Sr. Blvd. and Riverside Drive.

“That will be closer to my daughter,” said Hurst, who currently resides in the Vineville community. “My daughter’s over that way. She’ll feel more comfortable with me being safe.”

Macon Housing Authority Director Mike Austin told her to watch for a sign going up on the site. Notices will share information about applying for the new apartments slated for those at least 55 years old.

Work began shortly after the ink was dry on the contract signed with investors late last month.

“Kudos to Piedmont,” said Kathleen Mathews, director of In-Fill Housing Inc., the non-profit arm of the housing authority that builds new affordable housing that is in demand. “We’re really excited about that.”

Posey, a senior himself who is closer to 70 than he is 60, understands how important it is to have attractive housing available to older folks.

“They might want to be out this way and enjoy the amenities that you have out here,” Posey said. “I wouldn’t want to be stuck in some place I didn’t like.”

Many folks who are up in years decide to stay put in their paid-for homes, reducing the amount of available homes on the market.

“As the boomers age in place, say in a home, it often can fall into disrepair, become unsafe, etc. and if you don’t have a nice alternative you may be forced to stay in that sort of situation,” Austin told the Center for Collaborative Journalism in an email.

In most cases, their fixed incomes can’t afford luxury retirement communities or even more modest homes where landscaping and upkeep services are available.

Macon-Bibb County has a poverty rate of 38.6 percent – nearly three times the state average, according to 2019 statistics.

Many post-World War II baby boomers are no longer able to care for single-family homes. They are looking for affordable alternatives and competing with those starting out in the workforce.

“Every property that we’ve got, whether it’s conventional public housing like Davis Homes or whether it’s Tindall Fields, every one of them has a waiting list,” Austin said.

Before In-fill Housing Inc. goes into a neighborhood, research confirms the need so that high occupancy is practically guaranteed.

“We are required to have a third-party company to conduct a market study,” Austin said. “Of course, if the market study comes back showing weak demand, the investors and underwriters would not be interested, obviously.”
Low-income housing planned for Zebulon corridor
Another planned senior housing development in northwest Macon could lure folks to sell homes elsewhere in favor of the amenity-rich Zebulon Road area. Macon-Bibb Planning and Zoning approved In-Fill Housing’s proposed $12 million complex behind the Lowe’s store. The land is not too far from Carlyle Place, which is marketed as Georgia’s first and only “life plan community.”

Mathews noted the shopping complex, restaurants, grocery stores and houses of worship nearby as she presented the proposal recently.

In-fill Housing Inc. is applying for Georgia’s Low Income Housing Tax Credits for what will be known as Peake Point, which will provide 60 units on 3.5 acres at 7081 Peake Road.

Of those apartments, 25 will be designated for those 55 and older who qualify for Section 8 assistance. The other 35 units would not come with rent subsidies.

If tax credits are approved, construction could begin late next year with opening planned in early 2023.

Developers of another new low-income housing apartment complex also are seeking tax credits to build near the Peake Point site.

The project is contingent on the tax credits so the first phase would target a broad range of incomes and rental rates in 80 units. Construction could begin next spring with the opening set for summer of 2023.

“Market data shows a significant demand for additional housing at this particular location because of its close proximity to key destinations for shopping, services, healthcare and employment,” the P&Z application stated.

Phase 2 would add 72 more apartments in a conventional apartment community, not low-income units.

Joseph Johnson, who represented the family-owned company out of Valdosta during the recent zoning hearing, said the property would include a community room and garden, playground and an exercise facility.

“Sugar Creek is designed to complement its surroundings and project a high-quality aesthetic,” stated Johnson in a letter to P&Z.

One of the deterrents to new home construction, which contributes to the shortage of houses on the market, is the rising cost of lumber and building materials. That, plus supply shortages in COVID-19 era, could alter schedules, create delays and bust budgets of projects already awarded tax credits.
Downtown affordable housing on the horizon
In-Fill Housing Inc. recently secured investors for Central City Apartments, a $20 million three-building complex of about 80 units at the base of Walnut Street near the entrance to Carolyn Crayton Park. This project, which was awarded the tax credits last year, will be what is considered affordable workforce housing to support those with jobs downtown or who want to live in the urban core but can’t pay high rent.

Downtown could see at least one more workforce housing development in the coming years.

The Ohio-based developer with an office in Savannah is applying for Low Income Housing Tax Credits to build Hawthorne Commons on property the county purchased years ago for a possible second courthouse. This sale also is contingent on securing the coveted tax credits.

This year, the designations are reversed and Austin does not believe the Woda Cooper workforce housing project will hinder Peake Point’s chances, or vice versa. Different needs are being met on opposite sides of the county.

The senior citizen and low-income properties won’t satisfy those seeking to stop paying rent in favor of a mortgage, but could help break some of the log jam in available housing if more older residents sell homes in favor of safe, secure and affordable apartments in desirable neighborhoods.